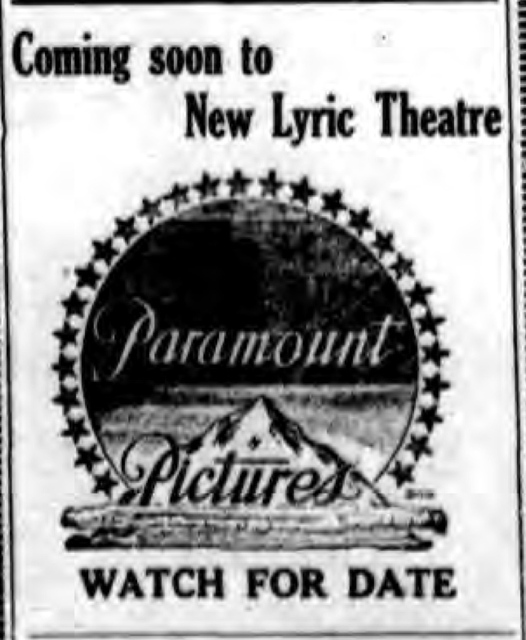 There were two Lyric Theatres in the village of Holley, NY, both of which were conversions of existing commercial space fronting the Village Square. Specific information about the opening and exact location of the original Lyric Theatre is presently unknown. However, brief one-line advertisements started to appear in the weekly Holley Standard newspaper as early as the March 14, 1912, edition. These identical little notices read “New pictures every night at the Lyric Theatre,” and could be found inserted between news items or advertisements at various points throughout the paper. While photo-plays may have featured nightly, live appearances could also be found at the original Lyric Theatre, such as when George Munro was scheduled to sing “The Weddin’ O’ Sandy MacNab” by Harry Lauder, according to a modest advertisement in the November 21, 1912, Holley Standard. A news item on August 7, 1913, alerted the locals that a “player piano” had been installed at the theater, likely used as accompaniment for live recitals as well as for moving pictures.

By the autumn of 1912, M. G. Carson, the manager of the Lyric Theatre, was placing larger, proper ads in the Standard, for certain bookings. One such feature was the exhibition of the early Italian epic “Quo Vadis?”(1913) – among the earliest films in history to run at feature length. It was advertised at the Lyric Theatre as “One Day Only” and “in Talking Pictures… Don’t miss this treat. You see the acting. You hear the voices.” I imagine this bit of showmanship utilized the vocal talents of hired actors speaking the dialog aloud from behind the screen. Two shows were scheduled for Monday, October 6, 1913. Admissions for the matinee were 5 and 10 cents, while the evening performance commanded 10 and 15 cents. Shortly thereafter, a presentation of “The Dramagraph talking pictures,” where patrons were promised “both the acting and the voice,” was advertized for the evening of November 20, 1913. “High Class” Vaudeville was also presented from time to time at the Lyric Theatre, with acts advertized as having been booked directly from the Family Theatre “and other well known Vaudeville houses in Rochester.” That would suggest stage facilities were present at the original Lyric Theatre.

In the summer of 1914, manager M.G. Carson leased a vacating storefront, adjacent to Lockwood’s Big Store on the Village Square, for the purpose of remodeling the space for a new and improved Lyric Theatre. Carson took possession of the space in March of 1915 and opened his new Lyric Theatre on Tuesday evening, April 6, with vaudeville and photo plays. According to a Holley Standard reporter, who had given the new theatre a “once-over” just prior to its completion, Carson had gone to considerable expense to remodel the store. The ticket lobby was described as “neat and commodious” with a “moving picture machine’s booth” installed above, featuring a ventilation system that “conformed to the strictest rules of the underwriters.” Entrances on both sides of the lobby, along with a rear exit, provided ample means of ingress and egress in the case of emergency. Seating capacity was to be approximately 300 on a single floor that had been sloped over two feet, offering unobstructed views for all. A stage and dressing rooms had also been provided. Holley residents were expected to feel justly proud of their “new ‘movie’ house,” which gave “a ‘citified’ air to the square.”

By 1916, Carson had begun to book product from the Triangle Motion Picture Company, home of popular movie stars William S. Hart, Lillian Gish, Mary Pickford, “Fatty” Arbuckle, Chester Conklin, Douglas Fairbanks and the Keystone Kops, not to mention filmmaking pioneers D.W. Griffith and Mack Sennett. On May 24, 1917, Carson took an ad out in the Holley Standard to announce contracts signed with both Triangle and Paramount, in order to ensure the finest in moving picture entertainments were secured for the residents of Holley. Paramount pictures were to be exhibited on Monday and Friday nights, while Triangle held court on Tuesdays, Thursdays, Saturdays and Sundays.

M.G. Carson eventually stepped away from operating the Lyric Theatre, which was re-opened under new management on March 7, 1918. The operator may have been Henry Clark, who was reported as having sold the theater to F.W. Gates in June of 1921. Gates operated the theater with his partner, George H. McCargo, until selling his half of the partnership to Francis O’Brien in 1923. McCargo and O’Brien continued to run the Lyric Theatre exclusively as a movie house until the opening of their new, purpose built Hollywood Theatre in August, 1923. The last announced attraction at the Lyric Theatre was Mabel Normand in “Molly O” (1921), along with a Century Films comedy short and a Pathe News reel, exhibited on Friday and Saturday, July 20 and 21, 1923.

Given that much of the Village Square in Holley remains intact from this era, it is quite possible that the structures that once housed both incarnations of the Lyric Theatre still stand today.

Ha. Thanks, Mike. Trying to put Holley, NY, on the Cinema Treasures map! Don’t ask why. I’m not sure I know the answer to that. Suffice to say, casual research on one recent entry here, sent me off wandering down mutliple paths in and around this little western New York hamlet.

So, turns out the site of the original Lyric Theatre in Holley was located directly across the Public Square from the newer Lyric described on this page. I’ve listed the original Lyric here on CT, and dug up some history on its origins – it opened as the Orpheum Theatre, by Frank L. Weller in October, 1911, out of a converted store front on the northeast side of the Square, adjacent to the Odd Fellows Hall building which was (and still is) located at the corner of the Square and White Street.

The newer Lyric, opened, as described above, by M. G. Carson, was situated at what would now have an address of 82 Public Square, adjacent to the current Community Library, which, at the time of the newer Lyric’s opening in April, 1914, was occupied by Lockwood’s Big Store.