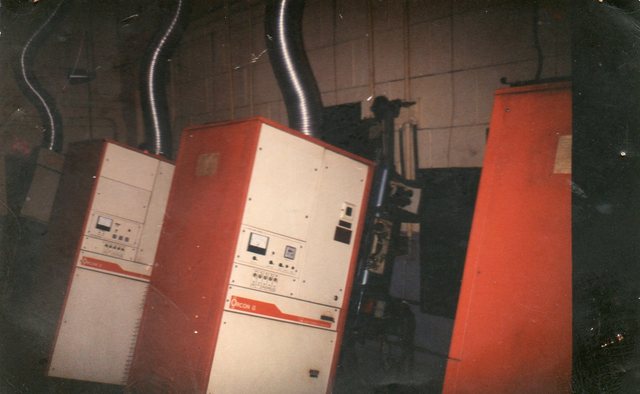 This is a not to good a photo of the projection equipment 1991.

Scares me that Radio City Music Hall had ORC consoles… I was never a fan.

We did extensive research on xenon lamphouses when we converted from carbon arc in the mid ‘70’s. At one point we had a different lamphouse on each machine. We picked the ORC’s because the bulb was vertical pointing into a 45 degree mirror. At the projection angle in the Hall a normal horizontal bulb would be burning way off axis. The vertical bulbs also had the advantage of darkening evenly around the top of the bulb as they aged which we felt would lessen the formation of a dark spot over the arc in an horizontal bulb which would absorb more heat and increase the risk of explosion. We kept the horizontal lamps on the two end machines since these machines were used for “film effects” and we needed the flexibility to point them over a wide range on stage (and to reposition them for the triptych in “Napoleon”. The ORC consoles (one of which was actually a prototype) gave us relatively little trouble from the time they were installed around 1975 until the time I left 1999.