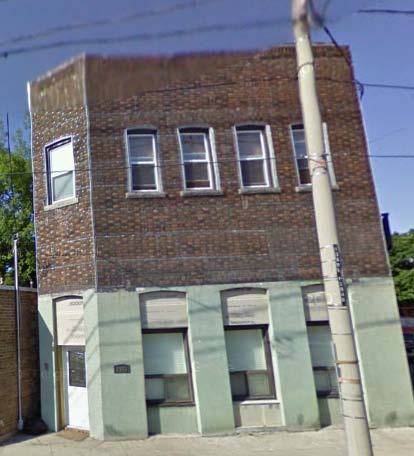 This is the front facade of the Original Mt Dennis Moving Picture Theatre. The only yet discovered reference is The Toronto Directory of 1922. You can perhaps make out where the Marquee was attached until the mid/late 70s. No known pictures exist as of Sept 2012 but surely exist in old family albums because this was the main entertainment hub of Mount Dennis in the late teens and eraly 1920s.

This facade has obviously been re-done since original construction. The DeGroote family Business took over the building.

Now we have the name of this Theatre. The Maple Leaf Theatre. This was 1006 Weston Rd. Mt Dennis. (Old number system) The other in the small chain was at 94-96 Queen West. The Proprietor lived at 97 Lambton. A J Milton Bean. His home is no longer there. It was where The Paramount Cleaners (now new row housing) was at the corner of Orla (now Guestville Ave) Shop. The Henry Brown film maker’s house at 33 Beechwood, Mt Dennis, is still there. Re-clad and foundation re-done, but you can tell its one of the early, probably turn of the century, wooden put-ups, so common in Toronto of the time, Mount Dennis homes. Film was so new that to have a Film Maker in the neighbourhood in 1921 must have been a big To-Do. He most likely had something or some connection to the theatre.