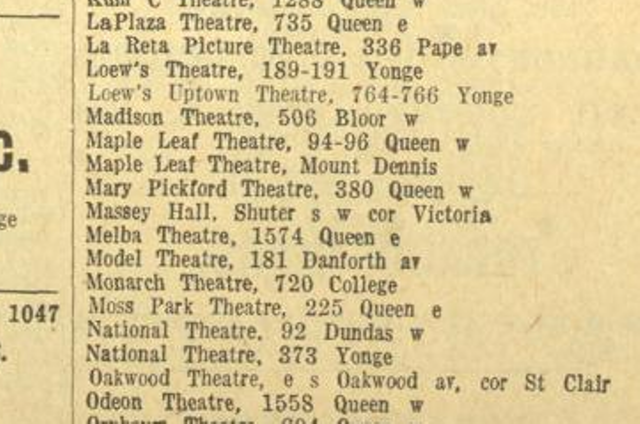 Maple Leaf Theatre, 1006 Weston Rd. The First Mount Dennis Theatre. Found in The Toronto Directory of 1921. There were two Maple Leaf Theatres. One on 94-96 Queen St. West and the other in Mt. Dennis. It is right beside The Canadian Legion Mt. Dennis Branch 31.

So there we have some round about proof that The Maple Leaf Theatre for Moving Pictures existed in Mt Dennis before The Mount Dennis Theatre 1929 at 1296 Weston Rd. Two Maple leaf Theatres existed in the Toronto area. Two people who worked in film on Beechwood and Lambton Avenues. Thanks to Janet, Mike, Wayne and Jim whose comments and own efforts and recollections rediscoverd a lost theatre that no one knew about or talked about except my father, E.C. Wright d.1991 and Robert Bud Nevin, both of Guestville Avenue.