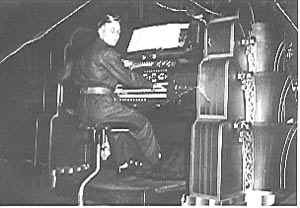 Len Rawle playing the Ritz Aldershot Wurlitzer. Photo given to me by Len, he said he used to play the Compton in the Empire Cinema next door whilst he was in the army & stationed in Aldershot but was often asked by the manager of the Ritz to play for them too. Len said he often had to run between the 2 cinemas to do the organ interludes.