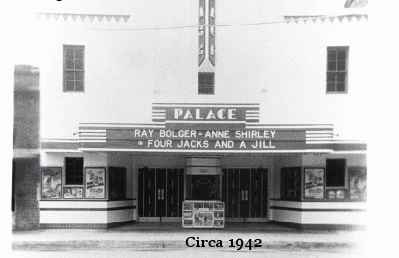 The buff brick exterior of the original building became the present Art Deco facade in 1938 during remodeling done by Mr. & Mrs. O. A. Englebrecht, who owned the theatre from 1927 until 1968. The stucco exterior of 1938 brought a major distinction to the Palace: it is reported by the Georgetown Heritage Society to be the only building of the Art Deco period found in Georgetown. “A Palace of dreams! That was what the local movie house represented to young people in Georgetown… Without the Palace, it is hard to imagine what would have sparked the creative and questing urges of thousands of youngsters who grew up here during the Depression, World War II, and the drought-plagued 50s.” (Williamson County Sunday Sun, editorial page, Dec. 23, 1990). When the Palace could no longer compete as a movie theatre and was forced to close in late 1989, it became the oldest continuously operated movie theatre in the same building in Williamson County.