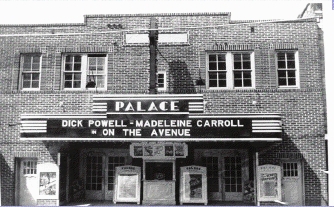 The Palace Theatre was built in 1925 by A.C. Moore of Bartlett, Texas. The grand opening was held in February 1926. It opened with silent films and three years later it went on to talkies.

The seating capacity in 1941 was listed as 500. It operated as a movie theatre until 1989 at which time it was the oldest continuously operating movie theatre in Texas.

In 1989 the owner Jack Hall was faced with declining revenues, competing with 20 new movie screens in the area and outdated equipment. Mr. Hall put the property up for sale.

Concerned citizens formed the Georgetown Palace Theatre, Inc. The group raised enough money to make a down payment and closed on the theatre sale in 1991.

The group cleaned and refurbished the theatre in a little over 90 days and it was ready to reopen.

Today the restored theatre operates as a non-profit Community Performing Arts facility. They have a mix of Broadway shows, live music performance and occasional movies. Total seating for the refurbished theatre is 295. Movies were dropped from the programming in 2012.

It’s a shame that the Palace in Fredericksburg was lost to a western wear store titled Parts Unknown though they kept the Palace marquee and tile facade in place for all to enjoy though no movies are shown here anymore.

I would love to see some interior photos of this theatre…been in contact with a Georgetown resident who may be of help to me.

Chuck1231: Great flickr site with lots of history given. Thanks. I have friends who are moving to Georgetown TX in January so I’ll make sure they go see a movie at Palace often.

Here are two photos of the Palace that I shot in December of 2009:

That is what my friend told me…thanks for replying and of course…Aloha and Happy New Year, my CT friend.

My friend enjoyed Dearly Beloved and said the acting was “first class and very delightful”.

I went through GT in December 2020 (after 6 months of COVID) and the “Camelot” was still on the building that you can see in the pics dated 2017 and were peeling off.

I returned summer of 2021 and the marque is updated and seems to be back in biz. (see updated pics)

It is really cool to see the little art deco building in an old town full of brown brick shopfronts. Though it is small it POPs out and has a unique personality.