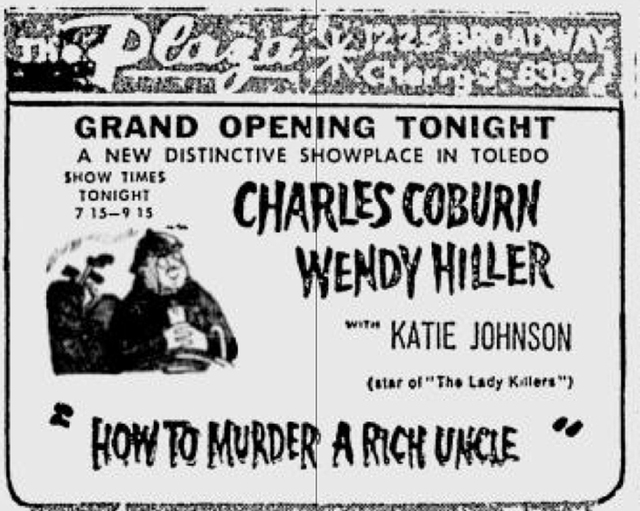 The Lyric was rebranded as The Plaza on March 12, 1958. The Plaza was part of the Art Theater Guild circuit which at the time was the largest chain of arthouses with theatres in cities including Detroit (Studio), Chicago, Louisville, Kansas City, Denver, Memphis, Cleveland (Heights), Champaign, IL (Art) Columbus (Bexley and World), and Milwaukee. The decline at the box office combined with technological changes in projection was not good for the Lyric but the Art Theater Guild had such success with the Westwood and liked the Lyric property for its “low overhead” which would allow for even more experimentation in Toledo. Serving coffee, more spacious seating as the number of seats was reduced to 480, displaying art in the lobby, and overtly not catering to family audiences, The Plaza gave short-term new life to this venerable property and allowed another exhibition place to independents and foreign film distributors who began to chip away at the fading classical Hollywood studio system. The theater rebranding was not a commercial success and dropped by the Guild circuit.