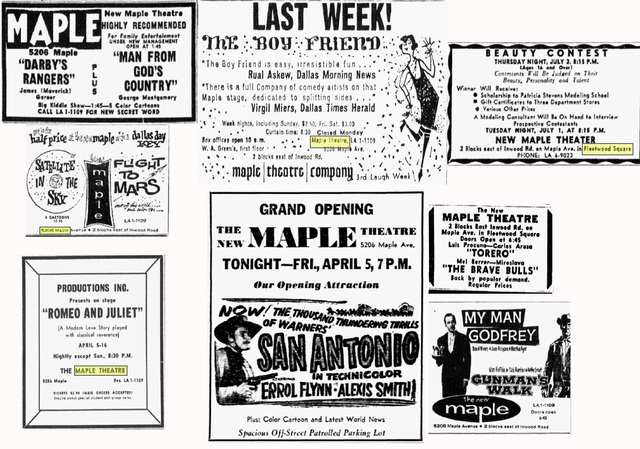 Various ads New Maple Theatre at 5206 Maple reflect the entire history of the theater. It opened with the original owners of the original Maple Theater at 5319 Maple on April 4 (invitation only screening) and to the public with San Antonio, as pictured. They tried traditional suburban fare but the era was passing it by. New owners tried to revive the flagging theater in the late 1950s with a new logo for The New Maple. In December of 1958, the last films played in the space as the theatre tried a new tact which the Lawn Theatre had done previously: legit theatre. The live stage plays by the Maple Theatre Company and by Margo Jones along with events brought the crowds in. But the Fleetwood Square project (seen in upper right ad) went from having the Maple at the center of the Fleetwood Square to demolished when the Dallas Market Center concept enveloped the Fleetwood Square projects. The theater demo’d for apartments plus retail.