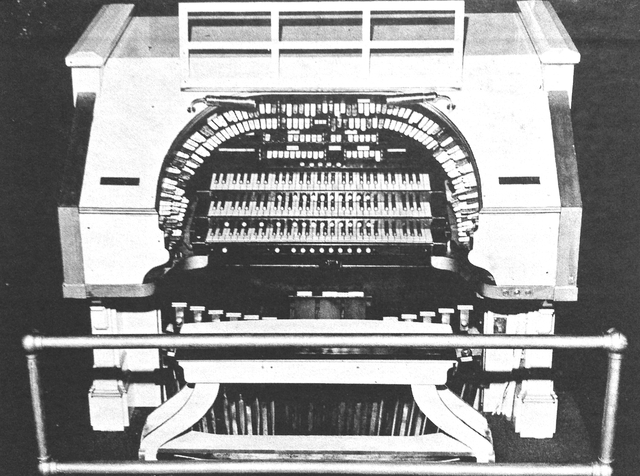 The Beautiful Console Kimball Triple Console organ was installed in Baltimores Stanley Theatre Baltimore in 1927 at a expansive cost of $50.000 dollars. The organ was able to rise out of the orchestra pit with a push of a button controlled by the organist and was capable of playing a Kimball upright piano from the console and featured a series of off pitch couplers which allowed the organist to play chords with one finger. It also featured Crysoglotts, Glockenspiels chimes and of course cymbols and over 300 stops and tabs. Today the console of the Stanton Theatre lives on in the John Dickerson High School in Wilmington Delaware where it is being used for a duplicate Kimball Organ that was saved from the Boyd Theatre in Pennsylvania. But the 15HP Spencer Blower remains under the parking lot of where the Stanley once stood next to the Mayfair Theatre as a special reminder.

John, you are correct. In addition to the blower being under the parking lot, the piano and the swell expression shades (which were controlled by the organist at the console for volume) went down with the building. This was shared with me by several of the crew who restored the great Kimball in the 1960’s. There was an unscrupulous organ broker who bought the organ away from that group and offered to sell at back at a huge profit. Before the broker could hear the organ when he came from the West Coast, the organ was disabled in a way so it could not be played but was unharmed. I have two copies of Leonard MacLaine recording. The off pitch couplers were often known as trick couplers. The largest Kimball, in the Atlantic City Boardwalk Hall Ballroom, still has them and work.