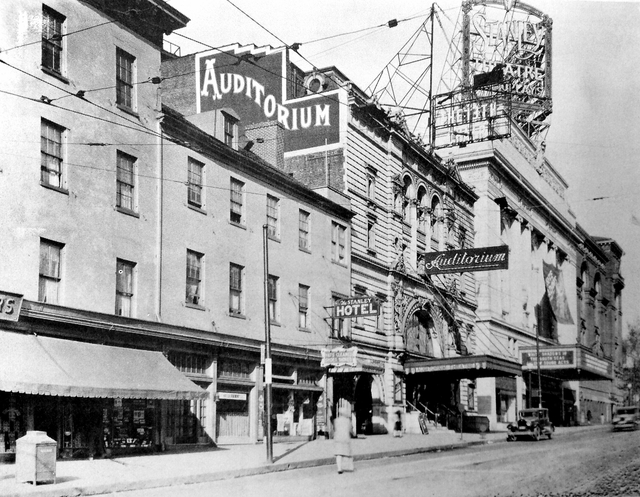 Located adjacent to the Mayfair Theatre, and built on the site of the Academy of Music. The Stanley Theatre was Baltimore’s largest theatre, opened on September 23, 1927 with Billie Dove in “The Stolen Bride”. Organist Ernie Cooper was at the console of the Kimball 3 manual, 31 ranks organ. The Stanley Theatre was coldly beautiful and had 1,860 seats in the orchestra, 1,800 in the balcony, 280 in the mezzanine and 60 in the boxes. It felt remarkably like an overdecorated railroad station, and despite its grandeur was never overwhelmingly popular or successful. In August 1928 it was leased to Loew’s Inc. The World Premiere of “Tarzan the Ape Man” starring Johnny Weissmuller was held at the Stanley Theatre on March 11, 1932. Loew’s Inc. relinquished their lease to Stanley-Warner in April 1934. In February 1955 the World Premiere of “Battle Cry” starring Van Heflin was held at the Stanley Theatre.

It was taken over by Morris Mechanic in February 1958 and was renamed Stanton Theatre on April 30, 1959. It screened its last film in March 1965, and following a month long run of the stage version of the musical “Oliver”, it finally closed on April 17, 1965. It was demolished in July 1965.

The spot where once the Stanley Theatre stood is now a parking lot.

Leonard “Melody Mac” McClain recorded his Album “LEONARD MACCLAIN PLAYS BALTIMORE’S FABULOUS STANTON THEATER ORGAN” in 1964, a year before the Stanton was torn down in 1965. It features 12 beautiful vintage musical pieces played by Melody Mac at the Stanton, currently it is the only known recording of the Hugh Kimball Organ used in the Stanton and is also the only know recording in the Stanton Theatre.

I attended Western Senior High School (1963-1967) which was next door to The Stanley. We had our school assemblies there and after The Stanley was torn down we walked over to The Mayflower. Seemed strange to have two movie theaters next to each other and another on the opposite side of Howard Street.

A little small correction Mayfair not Mayflower. I am very interested to hear that you attended Western High School on Howard Street. The Building in S still Up but now is used as Apartments and Rent Space. The Mayfair is closed up and in terrible disrepair condition with the roof collapse in 1998. And the poor Stanley gone from our memory. Although the Stanley is gone it’s memory will linger on forever in our hearts.

Mayfair: OMG, I have two copies of Melody Mac’s album. One is signed by Dottie McClain Whitcomb. BTW, the console of the Stanley Kimball organ lives on at the John Dickinson High Kimball Organ, restored to pristine condition.

This Coming September 23rd 2013 will mark the Stanley Theatre’s 86th Anniversary Inaugural Opening with special event “The Stolen Bride” with Billie Dove and Warings Pennsylvanians including Carlos and Valerie dance trio and Ernie Cooper at the Fabulous Stanley Theatre Kimball Organ. It will be 86 years ago that the Stanley opened and 38 years of operation before sadly being demolished for a lousy parking lot. Long Live The Memory of The Stanley/Stanton Theatre of Baltimore City MD (September 23rd, 1927-April 17th to July of 1965) 38 years of Fine Theatrical Entertainment to Baltimoreans Everywhere. If there was a single moment in your life that you can remember as a young lad or teenager going to the Stanley or Stanton please feel free to share that memory with us here on Cinema Treasures and keeping the memory of The Most Prettiest and most spectacular theatre ever seen in Baltimore The Fabulous Stanley Theatre

I saw several movies at The Stanley / Stanton. “The Lone Ranger”, “Old Yeller”, “West Side Story”, “The Music Man”, “55 Days At Peking” and “The Carpetbaggers”, which I’d completely forgotten about until another note, on this page, jogged my memory. Earlier, when I was a young boy in the 50s, I remember seeing at least two “Westerns” there, whose titles I can no longer recall. One starred Randolph Scott and another (I think) featured Rory Calhoun. There may have been a few others, as well…if so they’ve been completely erased my memory.

In May, 1928, Loew’s and the Stanley Corporation agreed to “pool” the Stanley with the Century and Valencia, with Loew’s operating all three Baltimore theatres. This deal lasted until 1934, when the Stanley reverted to management by the Warner Brothers owned circuit, according to reportage in Variety.

Morris Mechanic would not commit to building the Mechanic Theater as long as the Stanley stood.