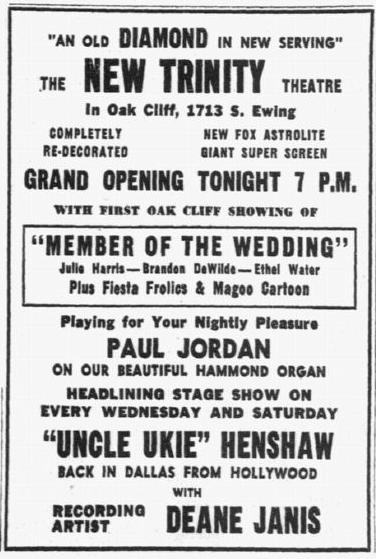 On November 4, 1953, Mrs. Victor Jones as owner and Mrs. Lottie Burt Strong as its manager, relaunched the “new” Trinity with Bobby “Uncle Ukie” Henshaw coming from the Malco Theater in Memphis after a long career in vaudeville and motion pictures. The theater ad does have the wrong address that would be corrected to 1730 S. Ewing in future ads. The showmanship feature renowned organist Paul Jordan and singer/actress Deane Janis. Jones and Strong equipped the theater with new sound and CinemaScope-like capable screen. But widescreen and showmanship weren’t the ticket for the new Trinity. And the theater closed again in early 1954. It would get one more shot as a theater when A.J. Vineyard took on the theater beginning a year after Jones renaming the theater the Ewing Theater.