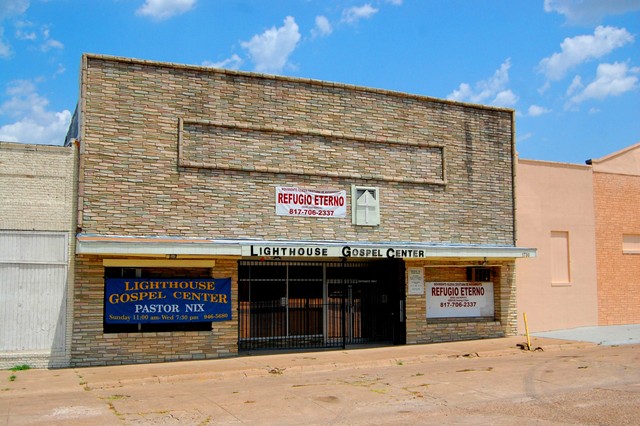 An old movie theater ad from 1949 for the Trinity Theater.

I now have a photo up of the TRINITY (Heights) Theatre, located in Oak Cliff / Dallas Texas. Photo was taken on February 6 2011..
RAC Photography

Dallas County Appraisal District Site shows the building/strip to be built in 1950..

Claude V. Caver doesn’t get much credit for inventing the concept of the Drive-In in 1921 but that’s what he did in Comanche, TX getting a permit to build a screen on the town’s courthouse lawn while he remodeled his indoor theater. Residents enjoyed the novelty of watching films from their cars. But Caver moved to Dallas in 1928 to launch the Trinity Theater in the Trinity Heights annex within Dallas’ Oak Cliff. The MGM lion, Leo, visited the theater on December 13, 1929 as the first of three Dallas’ theaters in that year’s tour. In October of 1934, H.C. Houston purchased the theater from Caver and brought in cushioned seats, acoustical treatment, and new sound equipment among the improvements. As a not so welcome to the neighborhood, Houston was a defendant in a $5,300 lawsuit brought by a patron who tripped over a rug in the redecorated theater.

In 1940, Houston put in a new façade, new marquee, and ticket box. The white stucco front with red centerstrip and ornamental blue diamond shaped tiles was retained for over a decade. The King Scenic Company did the remodeling. William Fumm took over management of the theater in 1944. In post-war Dallas, the independent struggled mightily against chains which were operating superior theaters in Oak Cliff including R&R Theaters. The downturn led Fumm to drop the theater and it was closed for a short period.

In 1953, George P. Hamrah and Charles Hothoot reopened the theater renovating the property very slightly and opening February 12, 1953 with Bill Boyd and the Cowboy Ramblers making a personal appearance. The theater had a weekly Friday amateur stage show for months until Hothoot and Hamrah dropped the theater just seven months into their unsuccessful run. Mrs. Victor Jones bought the theater and installed Mrs. Lottie Burt Strong as its manager. Strong brought showmanship to the “new” Trinity regularly featuring Bobby “Uncle Ukie” Henshaw coming from the Malco Theater in Memphis after a long career in vaudeville and motion pictures. The theater also starred renowned organist Paul Jordan and singer/actress Deane Janis. Jones and Strong equipped the theater with new sound and Fox AstroLight CinemaScope-like capable screen. But widescreen and showmanship weren’t the ticket either for the new Trinity. So the theater closed again in early 1954.

At the unrelated White Theater, A.J. Vineyard had a four-day celebration and would also celebrate the 20th anniversary of the theater in the summer of 1954. But multiple armed robberies at the neighboring liquor store took their toll on Vineyard as the theater owner, himself, was a victim of one of the liquor store robberies. The theater, itself, also was robbed at the box office. So Vineyard left the White Theater’s high crime rate area and he bought the Trinity in August of 1954 rebranding it as the Ewing Theater opening November 4, 1954. The Ewing was short-lived as few tickets were sold during Vineyard’s very brief run and the lobby was quickly retrofitted as a retail television store in 1955. Following its theatrical life and short retail period, the Trinity became home to multiple places of worship including the Abundant Life Center (which suffered a major fire in 1962), the Temple Community Church and, more recently, the Lighthouse Gospel Center Church into the 2010s. As a result, the suburban Trinity had surpassed 85 years of service as of 2013.

The police blotter on the Trinity during its movie era was somewhat active. The safe was burgled many times at the Trinity. There was the $10 heist in 1930. The $319 getaway in 1936. A $15 loss in 1944. A 1951 led to a net gain with $0 taken and a tool set left behind with another 1951 safe robbery leading simply to safe damage. A bicycle locked in the theater for safe keeping was stolen through a hole in the roof in a rather dramatic theft. And a 16-year old beat a 40-year old patron to death at the theater over a comment made by the 16-year old about the man’s daughter which led the man to reprimand the boy about his comments and the boy to beat the man to death. Not good.

For viewing all of my Theatre Photos Enjoy! **Randy A Carlisle – Historical Photography