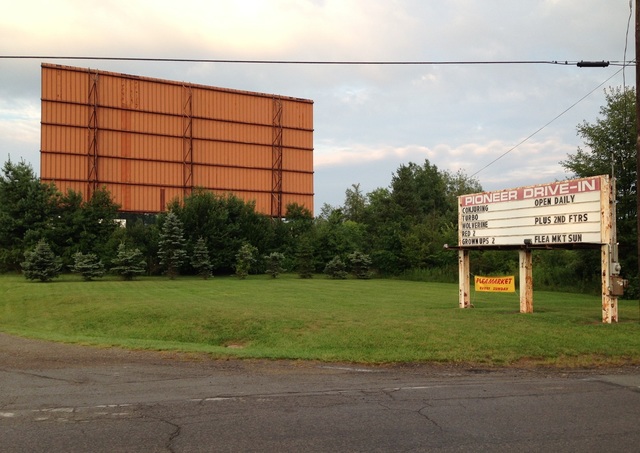 Thanks for the photo.

Nice picture,Clint’s movie should be above Mel’s movie.

Above address does not map properly. Use 2003 Pennsylvania 8.

Theatre is for sale on Loopnet. According to the ad digital projection has not been installed.

This is now called the Starlight Drive-In. They appear to be running only 3 screens but those screens are now digital. http://starlightdrive-in.com/

Although it was mentioned in a February 1959 newspaper ad, The Pioneer wasn’t listed in the 1959 edition of the International Motion Picture Almanac. It was there in 1961, capacity 600, owner Chester Demarsh.

The Butler Eagle wrote in August 2014 that the estate of Chester Demarsh still owned the land, and it had quotes from Clint DeMarsh, vice president of Epic Theaters, the Florida-based company that owned the Pioneer. Chester’s obituary (he died Christmas 2012) said that Clint was one of his sons. It also said that “After the war in 1947, (Chester) helped his dad convert part of the (family) farm into a drive-in movie theater.” Don’t know how that fits into a circa-1958 opening timeline for the Pioneer.

Boxoffice, Sept. 15, 1958: “William and Chester Demarsh, who recently opened their new Pioneer Drive-In on Route 8 about five miles north of Butler, are moving their Grove City Firestone store the the concrete screen tower building at their Larkfield Drive-In near Grove City. The father-and-son team has operated a recapping plant near the Larkfield for some time … Their Pioneer screen building near Butler may be offered for rent”