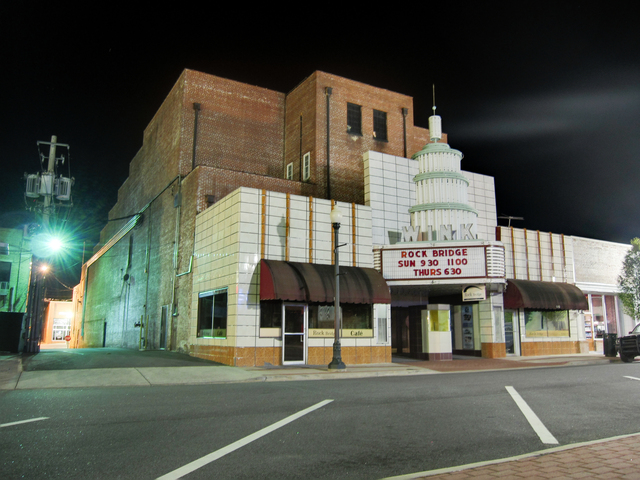 The Wink Theatre was built by J.C.W. Wink in 1941. It was designed to be a smaller version of the Fox Theatre in Atlanta. Until around 2005, the Wink Theatre was used as a classic movie theatre and live performance theatre. In 2008 it is in use as a church

Here is an undated photo:
http://tinyurl.com/5s8b3x

My Grandfather ran this theater in Dalton from 1941 to 1948. It was under the management of Loews. He moved all over Georgia running their theaters, but started in Dalton at the Wink.

I know some actors that graced the building as they were told and passed to me by my Grandfather, my Grandmother (who worked at the ticket booth) and my mother who spent her after school days there.

I am glad to know it still stands and has been repaired.

I know back in 2001 businessman Troy Hall was trying to restore the WINK theatre. He had to make bids on the building and he was the only one and bid one dollar over the$100.000 and became a theatre owner. A christian radio station he owned was moved to the WINK so he could run that and supervise the renovation.He was able to use day labor to save money.In a interview with the ATLANTA CONSTITUTION he said he remembered seeing “GONE WITH THE WIND"there. Often the concessions in the 50’s would take in$3000.00 in nickles on a busy saturday with double features and very few TV’s to watch at home.

Boxoffice of August 22, 1942, said that the new Wink Theatre was scheduled to open on September 10. The September 5 issue of Boxoffice said the formal opening would take place the following Monday. The first manager was named Ed Barber.

Hugh Manning and Herman Wink were partners in Manning & Wink, operators of the Wink and Crescent theaters at Dalton, and theaters in several other towns in Georgia and Tennessee.

After Herman Wink died, the M&W chain of nine houses was sold to Martin Theatres, as reported in Boxoffice of October 9, 1943. The other Georgia theaters sold in the deal were the Gem at Calhoun, Grand at Carterville, and the Strand and Cobb at Marrietta. M&W’s Tennessee houses were the Gage in Etowah and the Strand and Athens theaters at Athens.

A June 28, 1941, Boxoffice item indicated that a new theater planned at Dalton would be built to replace the Shadowland Theatre, which was being demolished. Information about the Shadowland is sketchy, but Manning & Wink had reopened it in 1938, and it was still operating in 1940. As it was demolished before construction on the Wink Theatre began, it’s possible that it had occupied the same location, but Boxoffice doesn’t say.

coweyhere’s link fetches a Flickr “this page is private” notice, so here is a hyperlink to the picture in the photostream page.