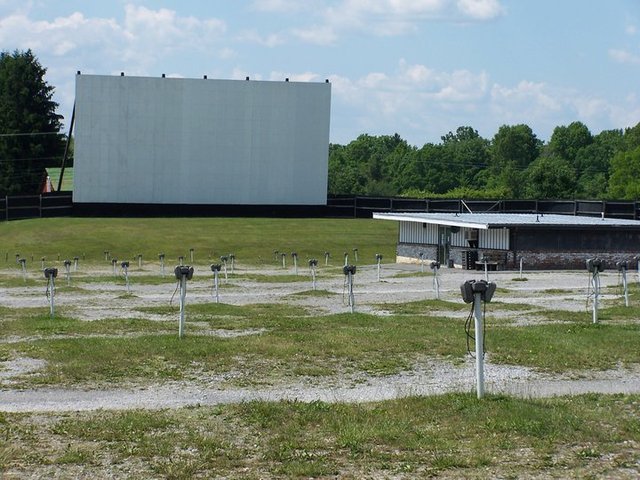 The Pipestem Drive-In opened in 1972 and is still open today. It has a capacity for 285 cars.

I saw Lord of the Rings: Two Towers and another good film, though I cant remember what, here. Its very close to Pipestem State Park a great state park with a nice lodge. So if you want to get out of the city and into the woods a little bit and see a drive-in cinema treasure this might be a good combination for you.

i seen a double feature there in 2005 , around 4 years ago when war of the worlds and the longest yard had came out . i have to say it was a great experience for a first time drive in theater. i have to say there food was good they had pizzia,hotdogs and there fresh popcorn with butter was grand!. and the prices was affordable. when they had changed ownership and management. i don’t if there prices are still the same or not. i will forever remember this grand drive-in!

I had no idea this drive in was still open! I called their number last night and got a message stating “closed for the season” I will definately visit next spring, this is just a little less than an hours drive from my house. They never advertise and I haven’t seen any newspaper ads for years, that’s why I thought they shut down about 10 years ago. Much closer to me than the Meadow Bridge Drive In, which has radio ads all the time, and is still open for the season!

The Pipestem opened in September or October 1972. There’s a “Watch for the opening date” ad in the Sept. 21 Beckley Post-Herald, then on Sept. 30 there’s an ad for the triple feature that “starts Thursday, Oct. 5” of Le Mans (G), Lawman (GP), and Southern Comfort (X). It advertised through at least Dec. 17 that year with “free in car heaters”.

The Raleigh Register of July 5, 1973 identified Ronald Warden of MacArthur as the owner of the Pineville and Pipestem drive-ins as part of a discussion of the legality of X-rated movies. Warden said recent Supreme Court ruling hadn’t changed his plans. “It’s not for the money involved,” he said. “It’s not what we like – it’s what the public pays to see. I don’t want to quit a good thing until I have to. Every time I don’t have an X-rated show, business drops off.” He stressed that he always showed X-rated movies as the third feature.

WTRF wrote in 2015 that (then-?)current owner Kenneth Woody bought the business in 2007 “from the original owner”. … “Woody, the owner of three other Mercer County businesses, said he depends solely on regular customers and word-of-mouth and does no advertising.”

A comment on a Flickr photo said that it “closed for a while” after the early 1980s. That’s the only mention I’ve seen of any downtime; the WTRF report said Woody bought the Pipestem “because he did not want to see it shut down.”

Who owns the Pipestem now? Karen Woody wrote on the drive-in’s semi-official web site that her family owns the Pipestem. The WV Secretary of State shows that Pipestem Drive-In Theater, Inc. was incorporated in 2007, has filed reports through 2017, and its only officers are Kenneth and Barbara Woody. But I’ve seen several business sources online that claim the Pipestem Drive-Inn Theatre is owned by Jimmy Warden, and that its president is Patricia Warden.