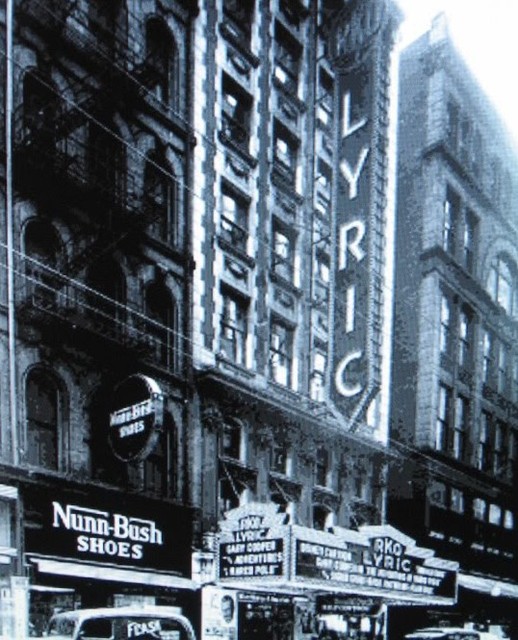 This once-popular vaudeville theatre opened on November 12, 1906 with a stage play. It converted to movies in 1921 and was later operated by RKO. The RKO Lyric Theatre closed on April 30, 1950 with Orson Welles in “The Third Man”. It reopened briefly as the Lyric Theatre again, but closed on November 30, 1952 with Alan Ladd in The Iron Mistress" The lobby was briefly converted into a retail store and the entire building was demolished in January 1953.

RKO came thru in the early 1930’s and purchased a string of Libson theatres including the Lyric Th.,then by 1933 RKO went into receivership, but recovered in the later 1940’s . However the RKO logos remained upon the theatre marquees until many were torndown in the 1950’s,1960’s&1970’s. Must have been cheaper than removing the Radio-Keith-Orpheum name.

We should give credit to Mr. Heuck the owner an builder of This Lyric Th. in l906 who was looking to produce a fancier form of entertainment than what was offered at his 2 theatres in,“Over The Rhine”. Namely Heucks Operahouse and the Peoples Theater, which played melodramas,westerns,and some national named vaudeville. Heuck was looking for a more genteel audience and probably bigger profits.

The Lyric Theatre opened November 12, 1906 with a live stage play. The Lyric closed for the final time on November 30, 1952 with Alan Ladd in “Iron Mistress.” It spacious lobby was converted to a retail store for about two years. The theatre was then demolished in January of 1953. The Cleveland Wrecking Company offered everything from the building including theatre seats for $1.50, the mirrors, the air conditioner and even the elevator.