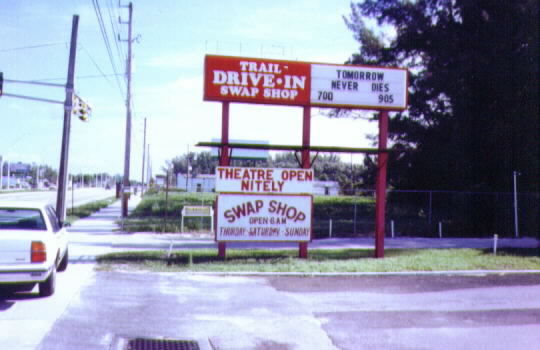 The Lake Worth Drive-In opened in 1968. This twin screen drive-in has a capacity for 460 cars.

This is now known as the Lake Worth SwapShop and Drive-In Theatre, by the same owners as the SwapShop (/theaters/10592/)

This website will give the currrent first run attractiosn showin as the Lake Worth Drive-In.

Nice drive in. Right on the U.S. 1 hwy, easy to get to. Nice Flea Market on weekend days. Thumbs up.

When did the name Change from Trail Drive-in to Lake Worth Drive-in? Does Lake Worth have the same name origin as Fort Worth, Texas?

“Drive-in Movie Memories: 71 Years of Double Features and Even Death — Only One Drive-in Remains in Palm Beach County: The Lake Worth Drive-In”

Says the first drive-in in the county was in an empty lot to the west of what is now Palm Beach International Airport and was called the Boulevard after going quasi-nameless for years.

Also that “The Dixie Skydrome, dubbed ‘The South’s Most Beautiful Drive-In Theater,’ [that] opened on North Dixie Highway in Lake Worth in January 1949” and closed in 1978.

I’ve been unable to locate pages on Cinema Treasures for the Dixie Skydrome as well as the Boulevard and the Boynton Outdoor Drive-In Theatre (which the article says appeared only once in the newspaper).

(A photo on the CT page for the Beach Drive-in is of an ad for four of the drive-ins in the article.)

The article includes photos, links to other articles about Palm Beach County cinemas, and ends with a list of the remaining drive-ins in Florida.

The Boulevard Drive-In does have a CT page. http://cinematreasures.org/theaters/58721