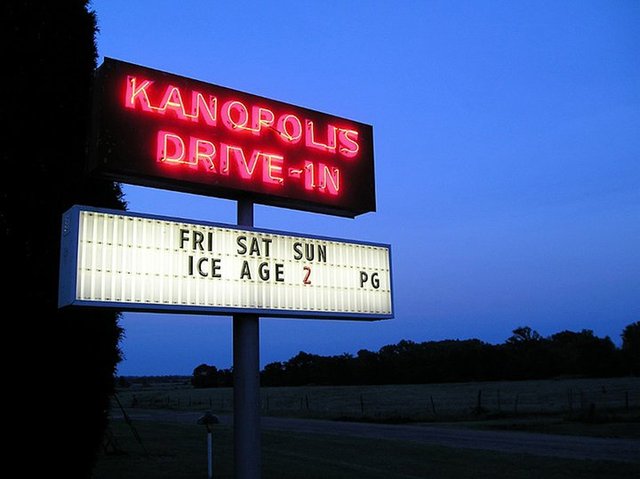 Located in the picturesque Smokey Hills of central Kansas. The Lakeview Drive-In opened in 1952 with a capacity for 185 cars and was operated by Tony Blazina. By 1955 it had been taken over by Commonwealth Theatres. It remained open into the 2000’s. This single screen drive-in had a screen 60 feet by 30 feet.

After several years closed, it re-opened as the Kanolopis Drive-In in May 2011, showing movies Thursday tru Sunday.

I was at this drive in back in August of 2009 and it has been closed for some time. There were a lot of weeds growing on the lot. I did not walk through because the gates were still pad locked. It is my understanding the the current owners have a huge asking price for the drive in, but that information may also be in error.

At one time this venue was as neat as a pin. There were no weeds on the lot and a very well run establishment. A lot of theatre owners could take a lesson from the pride on display here, but unfortunately like so many of the theatres on this web site, I am fear full that the Kanopolis Drive In is now apart of our memories.

Thanks Joel for the Sad update.

My wife and I attended the “Halloween Horror Monster-Rama” at the Kanopolis Drive-In on October 20, 2012. There was a nice sized crowd for this event, and watching all of those old horror movies was a lot of fun. It’s nice to know that this place is still in business.

Josh Webb is quick to say “no comment” when asked if he took dates to Kanopolis Drive-In. While growing up in the eastern Ellsworth County town, he was a frequent visitor to the iconic outdoor movie theater, but that was years before he met his wife, Amanda. She was reared in Wichita. Starting May 6, the Webbs, with 2-year-old daughter Brooklyn, will moonlight – literally – at the historic drive-in, which hasn’t shown a movie since 2006. The couple bought Kanopolis Drive-In last October. After some power washing, coats of paint, a new roof for the ticket hut, fencing and some general repairs, a special source of nighttime entertainment is set for reincarnation in the town of roughly 500 people. The drive-in was a mainstay in Kanopolis since 1952, but closed in 2006. “I always wanted to see it re-open,” said Josh, 30. His day job is superintendent of the Ellsworth Municipal Golf Course. “The years are starting to add up, and we didn’t want to see it fall down any more than it was,” he said. Many have shared special memories of the drive-in at the northwest corner of town, said Amanda Webb, 31, who works as office manager for Dr. Mark Herzog, in Ellsworth. “We didn’t want the drive-in to just sit there. It was deteriorating,” Amanda said. “Josh was really passionate about it, so we decided to go for it.”

The monster Rama was a lot of fun. Thanks for mentioning it! The drive in is doing well, people are supporting it and it remains a great place for families to come and enjoy a movie or two.

Sounds like Frank Dodson bought out Commonwealth’s share in 1956. From the June 2, 1956 Motion Picture Herald: “Frank Dodson of Ellsworth, Kan., has purchased the interest of his partner, the Commonwealth Theatres, Inc., of Kansas City, Mo., in the Bell theatre and the Kanapolis (sic) drive-in theatre in Ellsworth, to become sole owner.”

Then four years later, from the Feb. 22, 1960 BoxOffice: “Frank Dodson, owner of the Bell Theater at Ellsworth and Kanapolis (sic) Drive-In at Kanapolis, Kas., has leased these properties to Thomas Miller, an Ellsworth businessman, who indicates that he plans to operate both of the situations.”