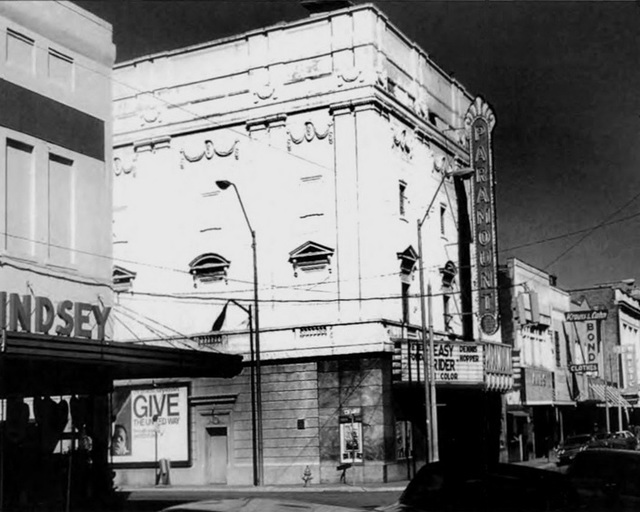 This theater opened on May 5, 1921 with stadium style seats, including high balcony and box seats. It also contained a 4/20 rank Moller theater organ, which was later replaced by a 2/6 Robert-Morton organ.

The theater originated as Sugar’s Opera House, built in 1915 by Barney, Sam and Isador Sugar on the corner of Jefferson and Walnut. In 1921, the brothers sold it to the Saenger Amusement Company who relocated the building to the corner of N.3rd and DeSaird in the downtown area.
In it’s early days of Vaudeville, the Saenger/Paramount was host to many famous actors such as Al Jolson, Jack Benny, W.C. Fields, George Burns and Gracie Allen, just to name a few. Entertainment at the theater ranged from the Zigfield Follies to local high school talent shows and amateur nights. The very first “Miss Monroe Beauty Pagent and Bathing Girl Revue” was held in 1925. The theater also facilitated the first dance floor in the southern United States. During the 1930’s, the theater’s Moller Pipe Organ entertained radio audiences on station KMLB.
On Wednesday, September 9, 1970, the theater closed it’s doors permanently that evening after the final showing of its last movie, ‘Easy Rider’. The theater fell into disrepair in its latter years and as a result of the opening of the Monroe Civic Center in 1965, it was decided that the Paramount would be demolished to make room for “economic growth” in the downtown area.

The above was an article published in a local newspaper after the closing of the Saenger/Paramount Theatre. There are some errors that need to be corrected.

The theatre was the second theatre built in Monroe by the Sugar brothers, the first was the Opera House on the corner of Jefferson and Walnut Sts. The building is still there and used as a pool shop and outdoor furniture. The second built on the corner of 301 DeSiard St. was built around 1915 as an upstairs movie & vaudeville house with stores on the first floor.

In 1920 this theatre was sold to the Saenger Company and they completely remodeled it into the Saenger Theatre seating around 1000.
There was a Moller 4/18 mostly a straight organ without a toy counter (drums, cymbals, bells, etc.) installed in two chambers (R&L) and a 4 rank echo organ under the balcony. In July, 1927, this organ was removed and replaced by a new 2/6 Robert Morton with all melodic percussions, toy counter and the bells and whistles used with the silent movies. When the theatre closed, I removed the organ and installed it in a local school and later met the man in charge of installing Robert Morton organs for the Saenger Theatre Company, Mr. Roy Gimple at that time of Oklahoma City, OK.

I’ve lived in Monroe all my life and can remember my parents taking me to the then Paramount. I really enjoyed going to the first movie of the day because the lights were on before the movie and there was a little man way down in the orchestra pit playing the organ. What a thrill to hear these wonderful sounds coming out of a mysterious place somewhere up high in the theatre. Years later during college days, a friend of mine and I would go down to the theatre and the clean up crew would let us in to play the organ. To this day, the theatre organ bug is still biting!

It’s a real shame that this theatre had to go due to “economic growth” downtown. The only growth has been parking lots for businesses that have disappeared.

My grandfather ran this theater during the 50’s – last name Blanchard. My dad was the house organist when he was in college at NE. This was how he came to meet my mom – who was in the projection booth doing homework- she also went to NE. Both were focused on music. I’d love to learn more about this theater. It’s nice to know the organ made it out alive. I remember my dad telling me about the sound fx it made.

Need some help on Camilla Norman Haddox, who is said to have performed in this theater between1934 and 1950. The older part of the family is mostly gone, but this is what we were told. This was in the time period of The Paramount-Richardson era. It was also said she doubled for Bette Davis in a few movies but have not been able to corroborate that story either. Would like any pictures of theater or any photos of cast members of any productions of the time period.

The May 15, 1921 issue of the Dallas-based trade journal Building and Engineering Digest said that Saenger Amusement Company’s new theater on DeSiard Street in Monroe had opened to the public on May 5.

The Paramount during its final years were taken over by ABC Mid-South Theatres. The Paramount closed its doors for the final time on September 9, 1970 with “Macho Callahan” as its final film.