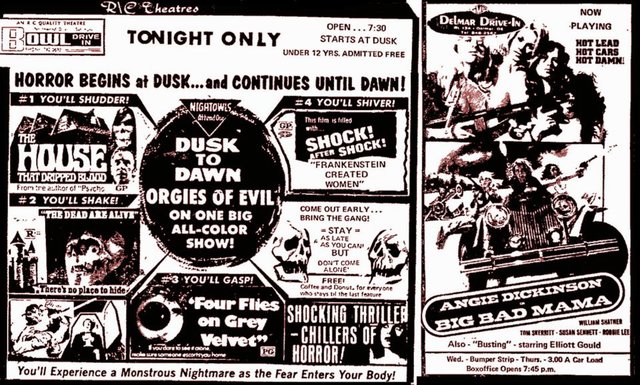 I went to this drive-in many times as a teen, as well as Delmar Drive-in, Sussex West Drive-in (Laurel, DE), Kent Drive-in (Dover, DE), Diamond State Drive-in (Felton, DE), and Crossroads Drive-in (Denton, MD). Drive in movie theaters were a big part of Delmarva culture in the late 1960’s and early 1970’s when I was a teenager. Diamond State Drive-in was resurrected in the 1990’s and showed first run movies until 2008 when they lost their lease due to the death of the elderly land owner. That drive-in operator went on to purchase the Skowhegan Drive-in theater in Maine, and it is still in operation as of 2016, although currently being closed for the winter.

What is now Bowl Drive is where the entrance was located.

Boxoffice, Aug. 11, 1958: “Salisbury, Md. - The Ulman Theatre Corp. is planning to build a drive-in theatre near here. Bernard Ulman, Baltimore, circuit president, who was here to look over the proposed site, said that the drive-in possibly will be located on Route 13. The airer will accommodate 500-700 cars.”