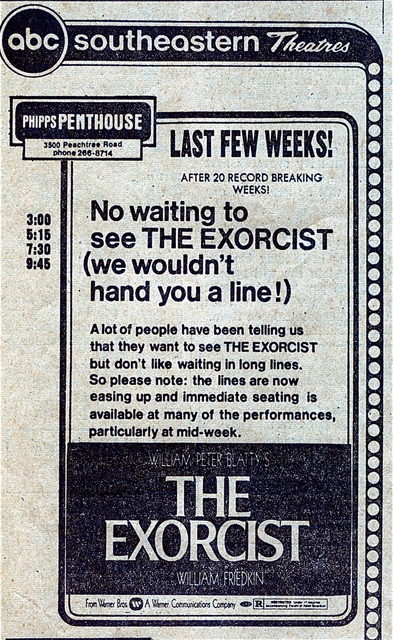 The Phipps Plaza Theatre was opened December 19, 1969 with Natalie Wood in “Bob & Carol & Ted & Alice”. On December 26 1973 a second screen the Penthouse opened. It became a triple screen when the Phipps Plaza 1 & 2 March 28, 1975. The three screen set-up, lost when they remodeled the Phipps Plaza shopping centre. At one time the Penthouse was THE place to see a film in Atlanta. Typical Cineplex Odeon run into the ground death and it closed in 1991. While Plitt ran it, it was a first class operation. Some of the seats ended up at the now closed Franklin Plaza in Marietta.

Phipps Plaza was the fanciest mall we knew of at the time in the early 1980s. It was the best place to see the 1st run movies. All of the stores were cutting edge and the theater was great.

treadway, you are right. Both theaters (the one downstairs was single screen when it opened and the Penthouse upstairs) were plush and made the film you were seeing a memorable experience.

It is hard to believe that I have been commenting on this site for 12 years, but in June 2005 I made my first comment on this theater. In it I lamented the fact that there were no known pictures of the auditorium in its original Ultravision configuration. This link:

is to a picture of the Plaza Theater in Columbus Ga. ABC built some wonderful looking Ultravision theaters in the late 60’s. Some like the Plaza were free standing and had a very impressive and distinctive look while others like Phipps were built in malls. The auditoriums however, except for size, were identical as they had to be to use the Ultravision process.

This picture is exactly what the Phipps auditorium looked like. Imagine dark red seats and deep gold curtains and you get the idea. The picture was floor to ceiling and if you look closely you can make out where the edge of the screen was, one floodlight inside the exit doors. The curtain, when opened, did not bunch up at the edge but disappeared behind the wall drape between the screen and the exit door. At the edge of the screen on each side was a bank of vertical floods. Whenever a movie with an overture played the house lights could be darkened and the vertical screen floods used until the end of the overture and the opening of the curtain.

Great looking presentation in these houses second only in my experience to the old Martin Cinerama / Atlanta Theater downtown which had a deeper curve and ribbon screen. 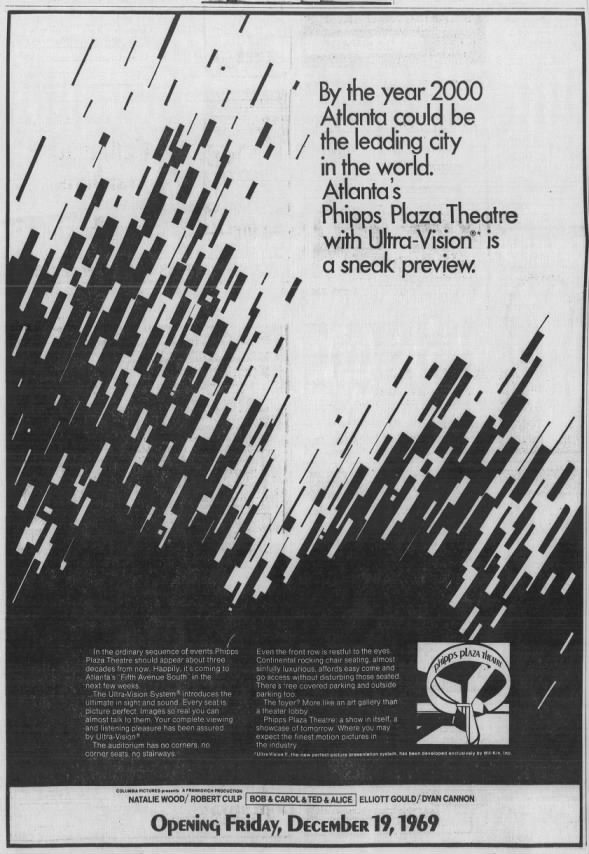 I think I remember the penthouse having a lower ceiling 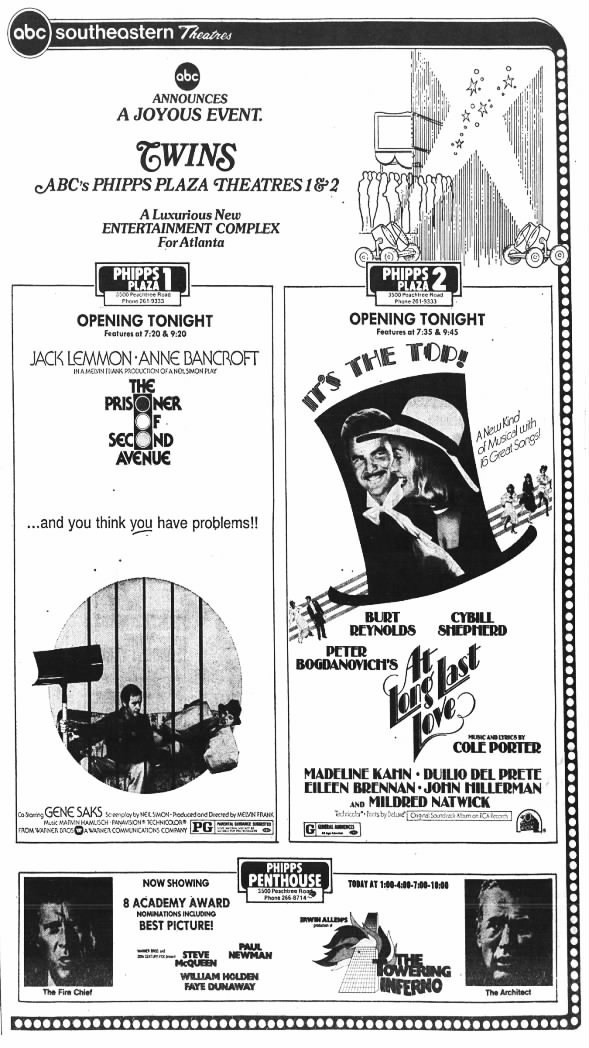 The twinning of the original PP was bad news to anyone who valued quality presentation. With its big curved screen, almost square auditorium, continental seating, and Ultravision projection system, it provided a moviegoing experience far better than anything else available.

This lame lineup for the grand reopening was a fitting booking for the introduction of the twins. “Prisoner” was a pale effort by Neil Simon to follow up on his two previous NYC hits, Odd Couple and Out Of Towners. It did poor business in this neighborhood that would always turn out for a movie aimed at the older audiences. As for the other one, silly story, over produced, and nice Cole Porter music ruined by two stars who could not sing.

And for this they ended the Christmas Attraction run of Young Frankenstein while it was still doing sell out business.

As for the Penthouse the photo section has some pictures taken from the booths that show how high the ceilings were.