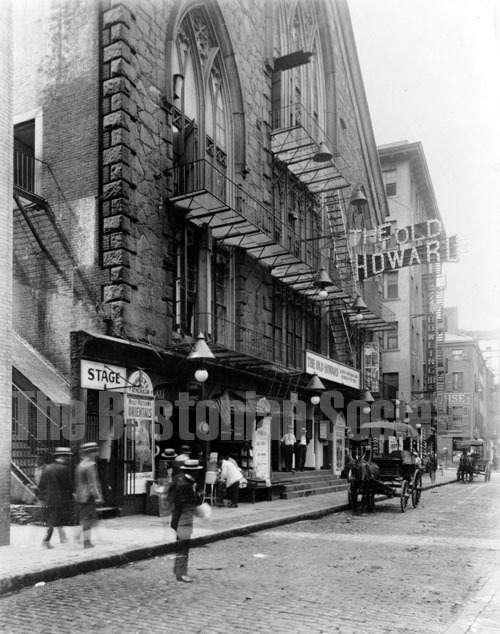 Located at 32 Howard Street (which no longer exists) in downtown’s Scollay Square area. Boston’s most famous (some would say notorious) theatre, the Howard Athenaeum opened on October 5, 1846. It was designed by architect Isaiah Rogers in a Gothic style and had 1,600 seats in orchestra, dress circle, gallery and boxes. The stage was 43 feet deep and the proscenium 36 feet wide. On August 10, 1868 it became a variety theatre. From May 1893 it was presenting spectacles and dramas. In 1897 it was renamed Old Howard Athenaeum and was presenting fight films on the Acmegraph.

A movie screen was installed around 1912, to provide entertainment during hours when the performers were not on stage – probably before noon, and between 5 and 8 pm. When the Depression hit, the Old Howard Theatre was presenting burlesque with old films between the stage shows. This was the policy on December 7, 1941 when the attack on Pearl Harbor brought many service personnel into the theatre. A new safty code was imposed on theatres from January 1, 1944 and the gallery seating area was closed.

City censors closed the burlesque performances at Old Howard Theatre in November 1953, and it went over to variety acts from February 22, 1954, but soon ‘girly’ acts came back into the bill. The Old Howard Theatre had closed by 1955. The city made plans to tear it down, along with the rest of Scollay Square, to make way for a new Government Center. A committee formed with the aim of saving the Old Howard Theatre and turning it into a national theatre museum, but a mysterious fire gutted it on June 20, 1961. It was torn down that same day. The site is now part of the Government Center.

Ron is correct. How can we fix this?

The “Patriot Ledger Archives” section of the May 7th Quincy Patriot Ledger has a summary of an article with photo from the Q-PL of May 10, 1962. It seems that a local contractor from Weymouth purchased the granite rubble from the demolition of the Old Howard which was then underway. In a cornerstone, which he claims weighed 9 tons, he found a sealed lead box. There were a number of items in the box including a copy, in good condition, of the Boston Daily Atlas newspaper from 1846. There is no mention of the other items in the box.

Ron, does it mention the contractor’s name?

David- the contractor was Richard R. Jancaterino, age 34 in 1962, of South Weymouth, married to Elaine. He was self-employed and got 140 tons of granite from the demolition site.

Ron, I have the answer! I found Richard, who is now retired and living in Florida. We spoke a short while ago and he confirms that yes, he did find the cornerstone and that he sold it – and its contents – to Frank Hatch. I’m sure you’ll agree that mean it is in very good hands, with a family that appreciates the value of the artifacts.

David- It’s always nice to hear that such artifacts have been preserved in good hands.

Hello if anyone knows how to get in contact with some with a relic or sign from The Old Howard please let me know. Rufus AL SOmerby was my grand father and he managed in 1930’s and 1940’s thanks

The Hatch family still has several treasures from the OH. They still live in Maine. I have a few bits of ephemera, see my Scollay Square website for my direct contact info, I’d love to chat with you, anyway, about your grandfather and the OH.

In a Feb. 1903 issue of the New York Clipper, a theatrical trade paper, there is an ad for the Old Howard, listing their show for the week of Feb. 23, 1903. The ad lists the name of their New York representative, and has two slogans: “American’s Oldest Variety and Burlesque Theatre” and “Always Something Doing 1PM to 11PM”. (By 1950 that slogan had change to “…9AM to 11PM” because they started their day with movies at 9AM. The show consisted of 13 vaudeville acts, each act featuring from one to 4 performers, plus “The Three Teasers” Burlesque with a cast of 36. Add in the musicians, stage manager and stage hands and you have to wonder where they had room for all these people backstage (it was not a big theater). Dressing rooms were on the ground floor under the stage. They could have extended this area forward for more room, but there was a business on the ground floor: a brewery/bottling works originally, and restaurants later. (There was no business on the ground floor in the 1950s). The program does not mention movies, but they started showing films right from the start when they first became available in the late-1890s. The NY Clipper is among the show-business trade papers on line in the Media History Digital Library; (free access).

I added David Kruh’s 1953 ticket stub to the Photo’s Section, with his description via the Dirty Old Boston Facebook page.