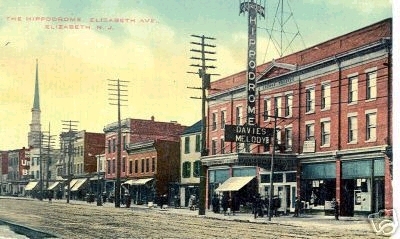 Gordon’s Hippodrome Theater was opened prior to 1914. By 1926 it had been taken over by William Fox and renamed Fox’s Liberty Theater. As of 1991, this theater was still open as a four-screen theater but has since closed.

Listed as a UA Theater in the 1970 Film Daily Yearbook.

As of early 2008, theatre is being converted into either a church, or a community center.

Here is an undated photo:
http://tinyurl.com/6hp4nn

This theater has been restored and is now home to 2 church congregations: (a different photo is in my print version of today’s Star Ledger)

The article has a great interior photograph – it has been nicely renovated; the color scheme is white with gold trim. Nice job!

After over three weeks of fliers circulating around town and at school. Many of us couldn’t wait for that party. That night I kinda changed my mind about going but two of my friend asked if I would at least drop them off which I did. We didn’t hear about the tragedy until the next morning when my two friends called to give me the details. Unlike Joe’s previous story my friends told me that it all started when two groups, I say groups cause officially gangs really were not the fad back then.
One of the of the rivals saw someone he had a problem with and acted on it by fling a chair to the person who was either down on the dance floor or up on the second floor balcony. This started a fight which made everyone panic. Since like Joe’s story the back door was locked and no other Exit signs where visible. Everyone tried to get out the same-way the got in, which was a narrow, straight, double flight, two person, side stairwell which lead directly to the second floor. This type of stairwell made it impossible for someone to regain their balance if they would slip be someone pushing them. All of these circumstance lead to the death of those young people that night who were trampled and suffocated by the panic people tiring to get out. I thought my two cents would be appropriate seeing that I could not find anything on this tragedy which did leave scars on many kids that night along with mine.