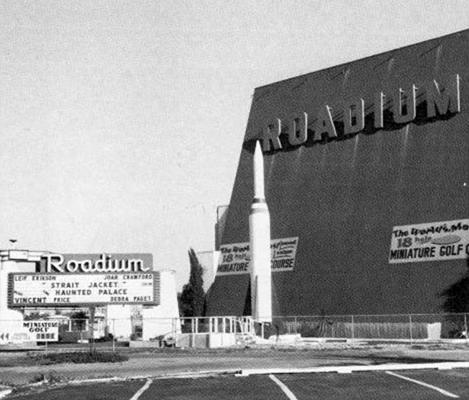 This was a run-of-the-mill drive in located in the North Torrance area towards Gardena, and a couple of blocks from El Camino College. It was opened on May 21 1948. In the 1960’s they began having swap meets and stopped showing movies completely in the 1980’s. The Roadium Open Air Market today is one of the largest of it’s type in California and has been a going concern for almost 40 years.

The marquee, screen tower and concession/projection booth buildings still stand and the concession area does a nice business. The speaker poles have been removed. In the late-1960’s-early-1970’s they ran primarily second run double bills and printed a weekly program flyer. In June 2019, movie screenings began again, but just on Friday evenings until the end of August.

Referring to a previous comment from years ago, this could have been originally designed as a twin. I saw a matchbook cover online that describes this as a dual drive in theatre. I posted in the photo section…

Opened in 1950 and closed in(late 1980’s?). Is the missile(or rocket?) seen behind the screen in the above photo still there? Why the name Roadium?

i don’t know why it was called roadium but that is a very interesting question.

Is it near a military or NASA base, hence the missle(or rocket?) seen behind the screen in the above photo?

According to the Daily Breeze of El Segundo CA, the Roadium has reopened for Friday night movies now through the end of August. Does that mean its status here should change to Open?

Also, the DB notes that the Roadium first opened in May 1949 but stopped showing movies in the mid-1980s.

Responding to some older comments above about covered over projection ports on the back of the concession stand and the pre-opening matchbook cover. Going by the aerial shots on historicaerials this drive in was planned as a 2 screen. In the 1952 aerial the lot has only been half graded. But in the 1962 Aerial some ramps have been added to the back half of the lot pointing toward the front screen. It may have been that after the owners started the flea market that they realized that they could make more money with the flea market than they could ever make with a second screen that they decided to forgo it altogether and only have a single screen. I think that now that they are showing movies again they should add the second screen.

Correction: This opened on September 8th, 1950. The Roadium Drive-In in Paramount (now Paramount Drive-In opened on May 21st, 1948.)