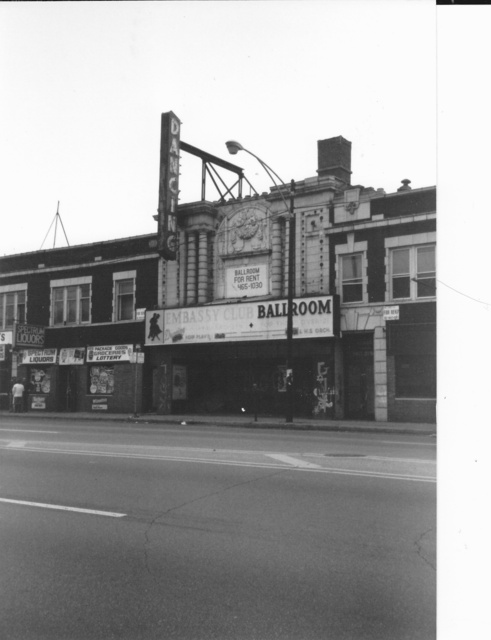 After closing as a movie theatre, the building reopened as a ballroom in 1957, which remained in business until 1981. It was followed by a brief stint as a rock concert venue as well as a short revival of ballroom dancing, but closed permanently in 1984. The Embassy Theatre was demolished in 1997 and an Osco drugstore was built on the site.

I grew up seeing the Embassy when traveling to an uncles house.

I guess this began my love for theatres, especially those that had a second life.

I’ll start by making corrections to some of the above comments.

Then a history of the Embassy.. from opening to demolition,
much from my own knowledge and from historian Lon Gaults book,, Ballroom Echoes.

It was not demolished a LONG time ago.. only the late 1990s.

The bus picture and Embassy sign mentioned above…. is not Fullerton and Pulaski or the REAL Embassy.
That picture is on Lawrence Ave… near Austin (in Chicago).
(To see actual pictures of the Embassy – read on)

Yes, the owners John Burke and his associates also converted and operated ballrooms at….
The Sun 7219 S. Wentworth Avenue
The Regent 6826 S Halsted
And the Boulevard at Ashland and Garfield.

The Ticket booth (with the dancers) and the original theatre marquee remained intact until the late 70’s. The marquee with all its flashing lights was regularly used announcing the name of the current orchestra appearing.

When Fullerton was widened to add turning lanes, both had to be removed. At that time, the new front sign proclaiming â€œ Embassy Club Ballroom â€œ (with the dancing couple) was installed.

At night and up close the word ‘dancing’ was still apparent,
but from far you saw red Neon flashing the alternating wordsâ€¦
â€ Embassy â€œ and â€œ Dancing.â€œ

The Embassy Ballroom began operation in December 1957.
They featured the Big Bands and the theme was â€œ over 30 dances.â€

According to historian Lon Gault, the Stan Kenton Orchestra played and drew over 1500.

My orchestra also had the opportunity to perform there every Tuesday evening from April thru the end of August of 1981.

The changing neighborhood and safety issues forced a decline in attendance.

The new owners immediately took over and began operating it as a ROCK Club the following weekend. Many regular dancers were turned away not having realized the Big Band Dances ended the week before.

On Sunday afternoon Feb 12, 1984, I attempted to start dances there again. On that day, we had a good crowd of 60 people. Fortunately it was a warm day… as there was no heat in the ballroom.

The ballroom however had lost it’s romantic aura and pleasant atmosphere, and was already looking dirty and in bad shape.

The dance floor was trashed. We used sugar from the local donut house as floor wax.

Also the stage was rebuilt into a Plexiglas platform with colored lights under the glass. While it looked nice, a leak from the roof made the stage quite slippery.

We tried another dance a month later, but we had to turn away 50 or 60 people because the Rock Club owners never came to open the doors.

Flooded boilers, poor up keep, and the ever changing neighborhood, forced the Rock Club to finally close the ballroom forever in early 1984 and it sat idle and fell into dis-repair.

More about the ballroom…..

A small ticket booth was built inside the lobby where you purchased your ticket and proceeded to another set of doors to the doorman.

Just past him you had the choice of staying to your left and going to the balcony, continuing straight ahead to the coat room or turning right and entering into the auditorium.

When you entered the Auditorium you proceeded down a red carpet to the dance floor. This carpet extended from wall to wall under the balcony section.

The main floor was leveled off, but only in the area in front of the balcony. Still this offered over 3,200 square feet of dance floor.

The stage was located on the East wall.

Twenty foot long bars with dozens of bottles of whiskey, wines and you name it, were located on the north and south side walls of the auditorium. Also located along the walls were chairs and couches to rest between songs.

There was a beautiful LARGE 25 foot stained glass window / skylight over the top of the ballroom. Noteâ€¦ It was saved as John Burke the owner sold and removed it prior to the closing of the ballroom in 1981. It was to be installed in a restaurant but I never found out where.

The balcony was used as a cocktail lounge. Except for an enclosed area where a 3rd complete full bar was located in the southwest corner of the balcony, it retained its original appearance, still using the theatre seats.

However, every other row of seats were removed, and cocktail tables were located in the removed area, so you had a place to put your drink. Many people took advantage of this area as you could sit and relax.

The Balcony was very nice to look at from the stage as every table had a small colored light on it.

And from above, you had a great view of the dance floor and the bandstand. It was also still quite dark in the balcony and even though most of the patrons were 60 plus… they ____________ ! ! (use your imagination… they did.)

I spent many weekends in the balcony as I was considered too young to be allowed in, but the owners knew my love for the big bands, and let me sit there and listen.

In the early 90’s the building became un-secure as all the boards were removed from the doors just prior to partial demolition.

This gave me the opportunity to do a walk thru of the entire building. It was still in good shape, although vandals had wrecked the apartments in the front building.

The entire balcony was gutted with the seats removed. The auditorium littered with junk, still looked like it only needed a good cleaning, although it was un-repairable at this point. I attempted a visit to the basement, but its flooded condition changed my mind quite quickly. The curtains at the back of the stage were still hanging.

About a week after I did my walk thru, a fire was started in the auditorium.

During my next walk thru, the auditorium was now blackened with the fire soot. Although not damaged, it stunk from the smoke and just looked terrible and itâ€™s fate was sealed.

The lobby and store fronts were demolished in the early 1990s.

During the demolition, the lowered ceiling in the main lobby was torn down and revealed the actual 3 story lobby with nice ornate wall coverings.

The Auditorium remained standing until the late 90’s.

An attempt was made to subdivide it into stores. Store fronts and doors were cut into the south wall. And parking was created in front of the stores like a mini mall.

Only one business moved in – an insurance agent – and the reminder of the stores, although partitioned.. were never finished. Upon close inspection, you could see the sunlight peering into the auditorium from the badly deteriorating roof.

The auditorium was finally demolished in the very late 90’s and Osco was built about a year later.

One final noteâ€¦ the stage curtains were still hanging and finally came down with the demolition of the auditorium.

I remember the aborted attempt to redevelop the auditorium. Very weird site in that unfinished state.

I wrote —– The Ticket booth (with the dancers) and the original theatre marquee remained intact until the late 70’s. The marquee with all its flashing lights was regularly used announcing the name of the current orchestra appearing.

Since the trollybus line on Fullerton was still in operation when the street widening and marquee removal happened, my comment “late 70’s” s/b late 60’s or very early 70’s —– as the trolleybus operation continued until 1973.

The above link will display several Embassy Ballroom tickets.

During demolition, I found a whole roll of them just laying on the office floor. (These few came loose from the roll over the years.)

Note.. The tickets were probably never used because they were incorrectly printed with… 3940.
The above heading address for the theatre is also incorrect.

The correct address for the theatre / ballroom s/b 3950 w. Fullerton as that’s the address owner Johnny Burke instructed me to print on the flyers for our 1984 dance.

If any one wants a few tickets.. contact me for my address and then just send me a SASE.

Correction…. Johnny Burke instructed me to print 3950 on the flyers and newspaper ads for our 1981 dances.

hers what i remember the Embassy was a ballroom,for many years my dad and uncle were cab drivers ,,they would pick up the patrons after they close ,,,late 70,s 1978 or 1979 era,, during my time in highschool which was kelvyn park 1980 to 1984 the Embassy was transformed into a disco dance spot call ( GENELLS) i beleave thats how it was spelled ,, b96 use to be there they played a lot of mix and house dance music ,,me and my buddy use to hang out in my car at night ( saturday) and pick up the cute puerto rican girls,,when they were looking for a ride home or to keep parting,,i beleave 81,,82,,83,, were the years ,,i use to live very close to there,,thanks matt

Thanks RSO1000 for the history.

I think I remember my older brother going to the Embassy for teen dances around 1960.

Seems to have been originally planned for Lubliner & Trinz and designed by David Saul Klafter. http://archive.org/stream/movpicwor63movi#page/n43/mode/2up/search/klafter