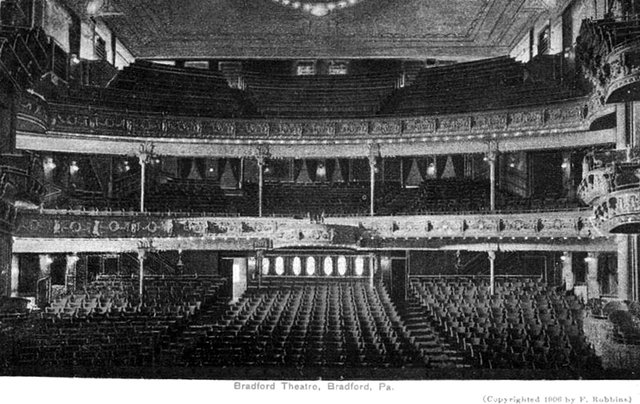 Originally opened in 1903, on South Avenue, the New Bradford Theatre could seat about 1,200, and was designed by architect Leon Lempert, Sr. The Bradford Theatre was for its first couple decades of operation, a venue for live performances, including legitimate theater, musicals, opera, and lectures.

In 1922, the theatre was taken over by Buffalo, New York-based Shea’s and renamed Shea’s Theatre. Along with movies, the theatre continued to host live acts on stage, including appearances by such stars as Ethel Barrymore, Boris Karloff, Harry Blackstone, Gypsy Rose Lee, and Sally Rand.

The Shea’s Theatre was later acquired by the Dipson Theatres chain, which operated it into the late-1950’s when it was sold to the Bradford Parking Authority and razed in 1961 to make way for a parking lot.

When a movie house was opened in the 1931 Hooker-Fulton Building in 1935, it carried on the name of the former Bradford Theatre by opening as the New Bradford Theatre (it’s still open today, as the Main Street Movie House).

The original 1903 Theatre was designed by Leon H. Lempert,Senior.

Does anyone have a photo(s)?

lostmemory: Once again you have come through for me with pictures AND history of the former Shea’s in Bradford PA. I just hung my head when I viewed the interior of this theatre that is only a memory now! Shame on you Bradford PA!

As the article states “Early theatres in Bradford, as elsewhere, were called "opera houses”. A local town near me had an opera house that was called the Swetland Opera House, but over the years has been made into apartments. I’d love to get inside and look around as I’ve been told that some of the apts. have unique walls and ceilings, but not sure that will happen any time soon!

“The Shea’s was later acquired by the Dipson Theatres chain, which operated it into the late 50s when it was sold to the Bradford Parking Authority and razed in 1961 to make way for a parking lot.” And today I saw with my own eyes while in Bradford PA this very unattractive parking lot! The interior photo posted by ‘lostmemory’ shows the beauty of this theatre that is now lost forever! Such a shame!

Here is a photo of the theater, circa early twentieth century, along with a 1903 poster advertising the theater’s opening:
http://tinyurl.com/ywocrb