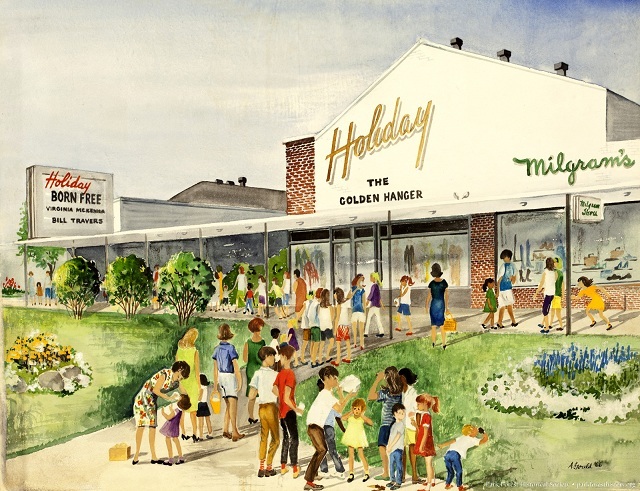 Opened on October 28, 1950 as the Holiday Theater, it was part of the Park Forest Shopping Center. The single screen auditorium had seating provided in orchestra & balcony levels. A feature of the space was the wood beamed ceiling.

Thankfully, Classic Cinemas returned to the Park Forest Theater, and in 1990, restored the theater to much of its original 1950’s appearance, and divided the auditorium into two screens, with capacities of 374 and 276 seats each. Two more auditoriums were created out of the balcony, and later, a fifth screen was added using space from a nearby retail store.

In 2008, it changed operators again, and was renamed Holiday Star Theater, which closed in late-summer of 2013.

(Continued) Here’s an in-depth Cincinnati Enquirer article on Arron’s lengthy history of high-stakes scams. The article is from 2004! View link

One victim is quoted as follows: “If he used half his energy doing something legal, he could be on top of the world.”

Though Arron would seem to be a textbook case of “flight risk,” he was released on a $20,000 bail after his Holiday Star-related arrest.

On June 26, 2011 at 2:30 p.m. in the Holiday Theater, 340 Main Street, Park Forest, the Park Forest Historical Society will present The History of the Holiday Theater Part Two. Willis and Shirley Johnson operated the theater from 1981-1986, and 1990 into 2002 with a name change to Classic Cinema’s Park Forest Theatre. Under their ownership, many improvements were made to the infrastructure, the marquee was added on the parking lot side, division of the main theater into three took place, and the fifth screen was built and transformed into an “art house” theater. Willis Johnson will be telling us about his ownership and developments under his management. Someone from the current management and Robert Matanky, one of the current owners, will speak on the progress they are making in reviving and updating the theater.

The Holiday Theater opened in the Park Forest Shopping Center on October 28, 1950. It was one of the first movie theaters in the country to be in a shopping center. It was possibly the largest theater built in the Chicago metro area since the Depression, having over 1,000 seats and a soundproof “cry room” for parents with children.

Memories of the theater, which was a social hub in the early days of the village, are vivid for the early residents. The auditorium was used by several churches for Sunday morning services, while churches waited to build sanctuaries. The Holiday also had a conversation room where artists displayed and where refreshments were served.

The Holiday was originally operated by the Harry and Elmer Balaban corporation which also owned the Surf and Esquire theaters in Chicago. In early 1952, the building, by architects, Loebl, Schlossman and Bennett, won the “Oscar” of theater design, awarded by Exhibitor and Theatre Catalog Magazines. A bronze plaque cited the Holiday for “international recognition as one of the most modern and well appointed of all current theaters.” The merit award was considered the highest honor offered for theater design by the motion picture industry.

The theater is documented on the website, Cinema Treasures, at http://cinematreasures.org. One of the creators of the site, Ross Melnick, says it is featured in the companion book, Cinema Treasures. A model of the Holiday Theater is on display at the Theater Historical Society of America in Elmhurst, Illinois.

Part One of the History of the Holiday Theater was held September 26, 2010, with a presentation by Jack and Becky Mallers Black, members of the Mallers family, projectionists and ushers who had worked at the theater over the years.

A display on the history of the theater will be in the lobby. The public is welcome to attend this free program.

The web site of the Holiday Star Theater has been moved to this URL.

The Holiday Star is now owned and operated by Matanky Realty Group. The Matanky’s are now booking one art or foreign film, when they can. They have done innovative programming, including having a display and appearances by Tuskegee Airman during showings of “Red Tails”. When you come to the theater, be sure to pass by the windows on the shopping center side to see the murals from “Let’s Go Out to the Lobby.” They are showing current releases, often within a week or so of general release. If you live close enough, definitely come out and support this theater.

I enjoyed many of the treasures of my youth in this theater back in the 1980’s.

Spent 50 years of my life living in Park Forest, from 1952-2002. This theatre is connected with many, many things in my life. It was the place to go on the weekends, when for 75 cents I could go and watch what are now classic movies. In my youth, in the 1950’s, I spent many a Saturday afternoon watching two hours of cartoons for 25 cents, non-stop, with a whole theatre of other noisy kids. At Intermission the Yo-Yo man would come on the stage and perform great tricks. Of course after the show I would absolutely have to have a Duncan Imperial Yo-Yo. Saw Goldfinger at this show too. Had to stand in line in order to get a ticket to get in. The show was filled, and the ushers would come with their flashlights and look for vacant seats for the late comers. The Balcony was perfect if you smoked, but you had to be over 18 to sit there or be with your parents. And the cry room was a perfect place for parents if they couldn’t get a baby sitter. Yes, life was good in “Camelot” in the 50’s-60’s. I was one of the lucky ones to have lived there from the beginning…

The theater was once again closed due to a “worker strike” in September of 2013. Causing the theater to be closed and only used for a weekly church service. The theater requires digital conversion to even be able to show second run films in the future. The theater that is remembered in other posts is gone. The bricks may stand – but the spirit has been all but wiped away.

In was a real great movie house to introduce me to going to the movies circa 65-66. All Disney or family films, I believe, was the policy. A beautiful and special place. You don’t know what you had until it is gone.

There are ways to use this theater as a movie house without having to immediately upgrade to the standard digital equipment. It’s too bad no one is willing to take the risk. I’ve looked in to the property and the rent would be very expensive.

Oh? Please enlighten. Perhaps back in 2014 you might have been able to get an occasional 35mm print but I think the ship has sailed as prints are very, very rare by now and if you are thinking repertory screening of old titles many of the prints available are junk. My friends in that field work very hard to get prints. But consider who the available audience would be; not the sort of turn out to see old movies just because they are on a big screen on film. They may flock to venues in the city to see obscure titles but they won’t out here.

Even with digital projection installed it’s unlikely to work because you would be unable to compete with Marcus for first run titles and sub-run—showing slightly older films for dollar—really does not exist anymore because movies go from first run to home media so quickly now. I wish that were not the case but that’s the reality which is why most subruns have closed or switched to first run if they could.