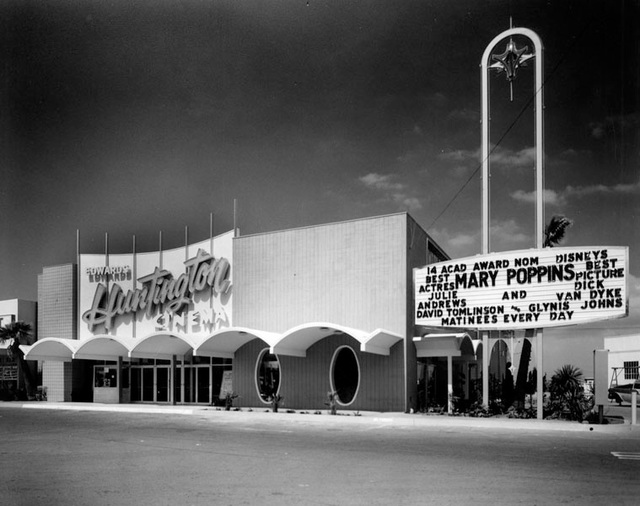 Edwards Huntington Cinema opened on December 25, 1964 with the movie “Goodbye Charlie”. This was Edwards' second county location, opening a few years after the Edwards Cinema in Costa Mesa. James Edwards II is probably better known as the founder of the modern Edwards chain that began in 1963 and grew to include 850 screens at 90 locations before its bankruptcy in 2000 and subsequent purchase by Regal Entertainment, which occurred after Mr. Edwards' passing.

After coming out of retirement, this was Edward’s second act as an exhibitor as he previously built up a chain in the Los Angeles suburbs beginning in the 1930s that lasted until his first retirement in the early-1960s, although he still retained control of some of these venues.

The 1,000-seat Huntington Cinema, whose architecture could be best described as Googie, was called in the opening day ad as “The newest and most modern theatre in America”. On December 22, 1976 the theatre was twinned, with two auditoriums of less than 500, and thereafter became known as the Huntington Twin Cinema.

Its last day of operation began on April 9, 1998, but it was probably no big loss to the Edwards chain as the same week they opened Aliso Viejo 20 in south Orange County.

Today some of the original exterior design elements of the theatre can be seen in its new life as an Old Navy clothing store. The “Huntington” portion of their signage was donated to Huntington Beach High School, about a mile and a half away, and can be seen above the entrance to the gymnasium.

A photo, which mistakenly locates the theater as being in Huntington Park, can be seen on the Los Angeles Public Library web site (lapl.org) in their photo collection.

James Edwards not only retained control of all his theaters in the San Gabriel Valley into the 1960s, and most of them well beyond that, but continued to expand his holdings there even after the main focus of the company’s expansion shifted to Orange County. The Edwards company owned or operated every english-language theater in Alhambra, San Gabriel, Temple City and Monterey Park from about 1962 until the company was taken over by the Regal group. (Edwards' San Gabriel Drive-In was operated by Pacific Theaters.) Probably 90% of the movies I saw before I was about sixteen, I saw at an Edwards Theater.

This theatre actually opened on December 25, 1964.

Here is the photo mentioned above:

The April 6, 1964, issue of Boxoffice Magazine ran an item on this theater, with an architect’s rendering which closely resembled the final design. At the time, the proposed name of the house was the Beach Theatre. The architect was Roland Decker Pierson. The cost of the building was projected to be $742,000, and seating for 1055 patrons was planned.

The theater was the second house built for United Cinema Corporation, a company founded and controlled by James Edwards, but which was separate from the Edwards Theatre Circuit, of which he was also still the president, and which still had its headquarters in San Gabriel.

There is a photo of the old signage here:
http://tinyurl.com/nnah99

The rather busy facade of the Edwards Huntington Cinema was featured on the cover of Boxoffice of July 19, 1965. An interesting feature of Roland Pierson’s design is the convex section of the front carrying the signage, which mimics the proportions and curve of a CinemaScope movie screen; a clever example of architectural form suggesting, rather than following, function. Louis Sullivan must have turned over in his grave, but J. Walter Thompson would probably have been impressed.

Reopened as a twin cinema on December 22nd, 1976. No grand opening ad found.