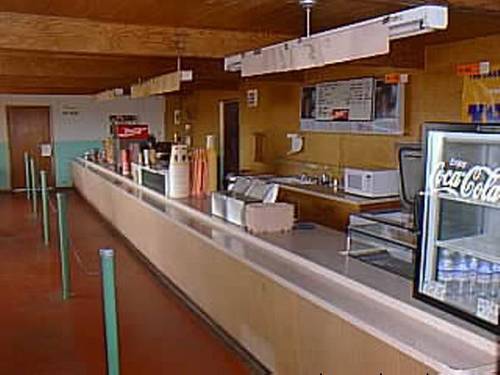 The original Pheasant Drive-In opened in the 1950’s and was located by the old Missouri River. When the Oahe Dam was built on the river near Pierre in the late-1950’s, creating Lake Oahe, the drive-in was moved to Mobridge. The Pheasant Drive-In re-opened at its present location in June 1960. This single screen drive-in has a capacity for 350 cars.

Until recently this drive-in was operated by Logan Luxury Theatres. They divested themselves of the drive-ins due to the cost of converting to digital. This is now independently operated. Facebook Page

From the web site:
The Pheasant Drive-In was built at its current location in 1960. Ron Maier, the current owner, has been running the Drive-In since 1976.

June of 2012 the screen was blown down during a micro burst and the Drive-In was closed for six weeks until it was repaired.

In June of 2014 the Drive-In made the conversion to a digital projector.

The 1955 Theatre Catalog and the 1959 IMPA both show the Lakeview but nothing else in Mobridge. Maybe it changed its name after the dam?

Then again, the 1963 IMPA lists both the Pheasant and Lakevu. By 1969 there was only the Pheasant.

Also, Wikipedia says construction on the Oahe Dam began in 1948. Why would anyone build a drive-in on a piece of land that they know is going in the lake?

Checking Film Daily Year Books, there was a Mobridge “Drive-In” that first appeared in the 1950 drive-in list.

The Lakeview was the first Mobridge drive-in to appear in the Motion Picture Almanac, in its 1955 list. By 1960 the MPA added the Lakeview’s capacity of 350 and owner, Ernie Bouud (sic).

Per a note in Motion Picture Daily, Ernie Borud bought an unnamed drive-in in Mobridge in April 1955.

A 1969 topo map showed the drive-in at its current location.

“Chapman Amusement Co., headed by George Chapman, will open the new Pheasant at Mobridge, S. D. in June. The theatre accommodates 400 cars and is located at the west end of town on Highway 12. … Another drive-in at Mobridge, the Lakevu, is operated by Ernie Borud.” — Boxoffice, March 21, 1960