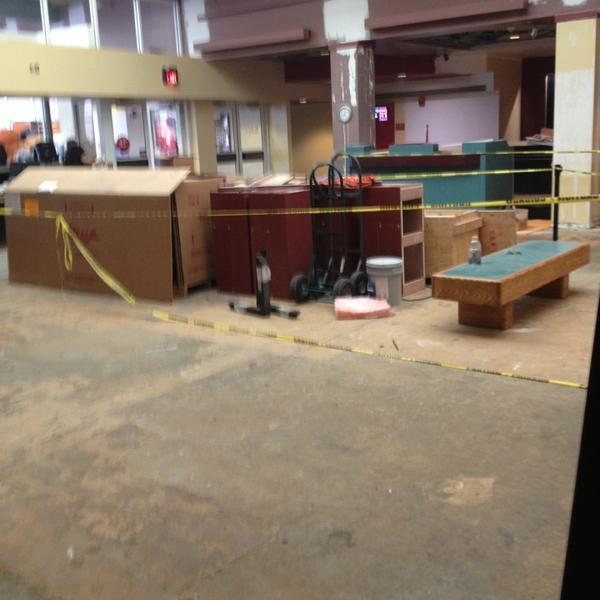 schedule dates for “Walk The Line”

Looks to me like they’re already showing that film. What makes you think they aren’t?

I am not sure I would call this a megaplex. This is a multiplex that grew to large proportions. They’ve had two expansions with different styles so the place has a sort of frankenstein feel to it. I would rate this theater as decidedly inferior to its AMC brethren the Lennox 24 and the Easton 30, both of whom were designed and opened at their present size, and both of which have stadium seating.

Original installation was all sloped seating. Stereo was limited to the largest 2 rooms.

First round of additions added 2 large rooms with a modified stadium seating where you enter at the highest point at the back, then the rows go down from there. They also added 2 very small rooms off the lobby at this point.

Showed DICK TRACY in 70mm. That projector may still be in the building, but that is not confirmed.

Shopping center it is located in is almost deserted due to zoning requirements of Dublin. Stores across the street in Columbus are thriving. Also, this location is not situated on a main street, so you have to know where you are going to find it.

Rumors of its closing have been around for a long time. I’ve heard it might close and AMC will build a new facility a bit to the west in the Tuttle Mall area.

Attended a screening of The Grey last night. First time I had seen a movie at this theater since 1995 (Congo). Digital presentation was good but the condition of the theater wasn’t great. Lots of cobwebs, dust bunnies, wall paper falling off the walls, numerous defunct SDDS signage, and the satellite concession stands were a mess and obviously hadn’t been used in years. Non-digital signage (box office, concession stand, theater doors) were not well kept and were often crooked and messy looking. Main box office and concession stands were messy and cluttered and the bathrooms were not as well kept as they could have been. Seating was somewhat uncomfortable in older non-highback, non-rocking chairs.

I know the theater is much older than the AMC Lennox 24 or AMC Easton 30 but there is definitely a “red headed stepchild” feel to the theater. The surrounding mall is mostly dead but there’s also no local competition aside from Cinemark Movies 12 which is subrun. AMC should really consider doing a major renovation and try to revitalize the property. They could easily expand the theater by buying up some of the surrounding empty lots and giving the Dublin area a nice first run facility that’s up to par with its sister theaters.

According to COLUMBUS BUSINESS FIRST newspaper, AMC Entertainment Inc. has committed to $8 million in upgrades to its movie theater at the Dublin Village Center.

AMC spokesman Ryan Noonan said the chain plans to incorporate the “dine-in” service and upgraded seating it installed at its AMC Easton Town Center 30 last year, and possibly a MacGuffins Bar & Lounge like at Easton and its AMC Lennox Town Center 24. The company applied for a liquor license for the Dublin theater in December.

Construction on the renovations will begin in March or early April and should be ready for customers this summer.

It Opened In December, Not March.