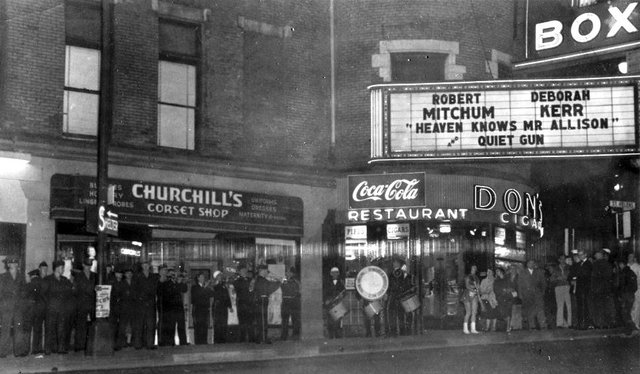 A 3 manual, 14 ranks Robert Morton theatre pipe organ was installed in the 1920’s.

It was remodeled for motion pictures and renamed the Broadway Theater in 1927. More than 20,000 people attended the grand opening on February 4, 1927.

It was renamed the Music Box Theatre in 1933. The building was destroyed in a spectacular fire on April 30, 1963. About 100 people were attending a showing of Alfred Hitchcock’s “The Birds” when the fire broke out.

While a movie theater, the Broadway/Music Box Theatre attracted big name stars like Ronald Reagan, Lassie, the Barrymores, Al Jolson, and many more.

This page at the City of Tacoma’s web site has information about this theater, and has two small photographs of it, including one of the building in flames on May 1st, 1963.

The name of the architect is given as J.M. Wood of Chicago, assisted by A.F. Heide, with exterior design by John Galen Howard and interiors by Sydney Lowell. The 1927 renovation was by architects Heath, Grove & Bell.

“On the evening of May 1st, 1963 fire destroyed the Music Box Theatre, originally known as The Tacoma Theatre and a downtown Tacoma landmark since 1890, causing damage that may amount to one million dollars or more.

The Tacoma Theatre’s extravagant opening January 13th, 1890 heralded 73 years of entertainment for the people of Tacoma. Situated in the center of downtown Tacoma, the theatre was considered the heart of the huge 9th and Broadway landmark.

Here are links to scans of my grandmother’s program from The Tacoma when she saw Anna Pavlowa’s farewell performance there in the 1920s.

Great additional photos! Thanks for the link. So nice to see where my Gram was for a performance she never forgot and always talked about.

Nice picture of the fire,I like the name Music Box Theatre.

The Pantages and Rialto in Tacoma are still active theatres as is the Blue Mouse.

Here are some additional photos of the old theater, specifically in regard to the 3/14 Robert Morton pipe organ.