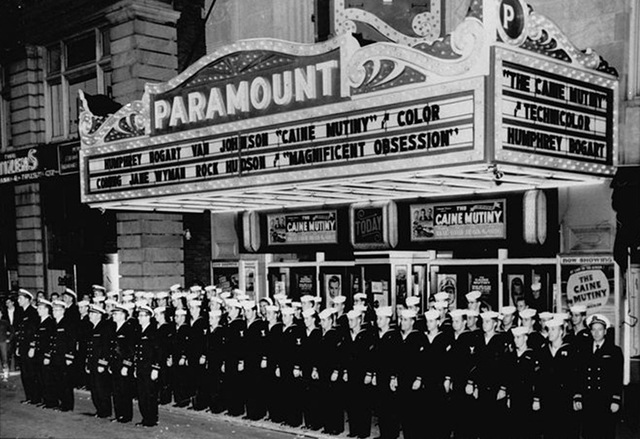 This Paramount Theatre in Hamilton opened on March 6, 1931 with Miriam Hopkins in “Fast and Loose”. The theatre was equipped with a Barton 3 Manual, 14 Rank theatre organ. It was operated by Paramount Pictures Inc. through their subsidiary Harry David.

The Paramount Theatre was closed in around 1960, and was demolished in 1961, to become a parking lot for an adjacent bank.

I have to jog my memory but, When we owned the organ I did some research and talked to some people in Hamilton and what I understand is that the building and area were becoming a blight to the city fathers and in the urban renewel policies of the 60’s and 70’s the plan was always, tear it down for something new and modern. By the time American society got nostalgic to thier childhood treasures many of these places were gone. I worked as a projectionist at the Grand THeater in Woodstown NJ in high School. It was the greatest job in the world. School students ran the place with the operator. THe problem was the bank next door bought the property years before and decided to closed the lease and put up a drive through. The theater was successful and provded a place for kids on the weekend to hang out in a rural community. Once it was gone there was no where for the kids to go. So mischeif increaed. Money before civic responcibility. It’s a lesson we need the power brokers of our country to get. Theaters bring communities together.

This theater was a bit strange in the time it was built. The days of Vaudeville were mostly over talkies where the standard and silent movie music was dead. So in the middle of the Depression some very hopefull group of people put up a real 20’s style theater. They put in what was a very large and very expensive pipe organ when most of the big builds had already folded. Even Wurlitzer was moving out of the pipe organ business. It is a real shame it didn’t last. Tv most likely killed it off in the 50’s . I’ve never been to Hamilton I imagine that the post war move to the suburbs and TV doomed the Paramount as it doomed many intercity houses.

“theatres bring communities together”..A great slogan that we are not to forget even though so many are lost to us now yet the ones that remain need to remain!

Miami University of Ohio is in that town so they should have an historic cinema! Shame shame!
posted by Patsy on May 5, 2006 at 2:30am
Patsy, I think it would only be fair to tell you that Miami University of Ohio is located exactly where it was originally built way back in the early 1800s in OXFORD, Ohio. Yes, they do have a branch with a few buildings in Hamilton but this city is not it’s home.

Growing up in Hamilton, I fondly remember the Paramount. It was the “premier” theater downtown. It was the first theater in Hamilton to install CinemaScope with full 4-track Stereophonic Sound. The screen was very large – covering the entire stage area (apporx. 50-60'). Although “The Robe” was the first film released in CinemaScope, because of Hamilton’s close proximity to Cincinnati, the RKO Albee had exclusive rights to “The Robe” for several weeks. Consequently, the first CinemaScope film to play the Paramount was MGM’s “Knights of the Round Table”. “The Robe” followed. The Paramount needed a good remodel job by the late 50’s but was still a grand theater. The Rentschler family owned the Citizens Bank next to the theater and when the lease expired, they purchased the Paramount in 1961 and had it demolished for, what else, a parking lot to serve their bank. Thus began the gradual demise of downtown Hamilton as a thriving commercial center.

erco46 – Do you know when the Grand Theater in Woodstown, NJ was built? Do you know the year it was demolished? Did you graduate from Woodstown High School? Year? I am a 1949 graduate and spent many enjoyable evenings and or Saturday afternoons at this theater.

The Paramount did not close in 1955. If it had, I would not have seen movies there and I did with my older brothers. I believe it was closed either in 1960 or 1961 the year it was torn down. We loved going there and I never saw a film anywhere else until it closed. I remember the balcony and the size of the place. We always went on Saturday afternoons. Even as such a young kid, I was heart sick when I saw them tearing it down.

The Paramount Theater always showed the Walt Disney and the Martin-Lewis films during their first run. You could always tell when one of these films were in town, because the line extended down to the corner of Second St (where the theater was located) and High St. Radcliffe’s Drug Store sat on that corner. Admission was about $.50-$.75 but my mother told me about how she had to save up money to see Gone With The Wind when it played there in 1939. Admission was like $l.50 to $2. The theater had little boxes on the side walls which looked like opera boxes. They also had a very fashionable lobby in the basement and a fancy powder room for the ladies (This of course I have no first hand knowledge except what Mom told me.

Paramount Theater — 18 South Second Street, east side of Second between High and Court (now a bank parking lot), opposite historic Courthouse. Paramount, Hamilton’s most elegant theater, opened March 6, 1931, with 1,813 seats (1,483 on the main floor and 330 in the balcony). Building extended 90 feet along Second Street with a depth of 175 feet to Journal Square. The Eagle Theater at the northwest corner of Court Street and Journal Square was one of several buildings razed to permit construction of the Paramount. The new theater was designed by George Rapp and C. W. Rapp, theater architects, New York City. The Midland Co. of Cincinnati, headed by Frank Messer, was the general contractor. Its theater-building experience included the Albee, Palace, Keith, Cox, Capitol and Schubert theaters in Cincinnati. A newspaper described the Paramount interior as a “combination of the classic and modern period, with a dominant Italian Renaissance motif. The vaulted dome ceiling, as well as the series of attractive niches, artfully illuminated by concealed lights … Give maximum acoustic qualities.” The last show at the Paramount was Sept. 5, 1960. It was demolished in January 1961 to provide a parking lot adjacent to the Citizens Bank. Contrery to previous comments, it wasn’t part of an urban renewal project and wasn’t in a declining area.

March 6th, 1931 grand opening ad can now be found in the photo secton