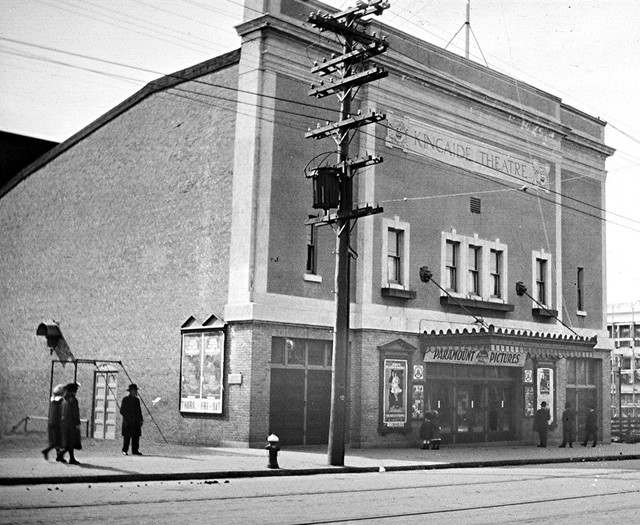 This was a theatre in downtown Quincy, on the present site of the Quincy Fair Mall and the former site of the Sears department store. Built sometime before 1919, it was a vaudeville venue, then became a movie theatre sometime in the 1930’s. In 1941 it was operating as the Quincy Theatre by Strand Theaters out of Boston, MA. The theatre was converted to retail use in 1952 and was demolished in 1959.

In May 1988 the eight-screen Flagship Cinemas Quincy was built on the site. This too has since closed in December 2006.

Check that, it may be the old Sears after all. I went by today, and it sure looks like the side of the building and the structures on the roof are pre-1980’s.

The Flagship Cinema and Quincy Fair Mall are not totally new buildings, but very heavily modified from existing structures which housed the Sears store. Partly on the site was the Kincaide-Quincy-Capitol Theatre. The Kincaide was built by the owner of Kincaide’s Furniture. It was a vaudeville house with about 1350 seats and had one balcony. It opened in 1912, and was the leading theatre in Quincy until the Strand was built. The stage door, painted dark green, was down the alley on the left side; it had a little wood weather shelter around it. There was a row of dressing rooms along the back wall of the stage. The facade was a pale cream stucco, and the rear stage wall was painted white. There was a faded sign on the rear stage wall which said something like “Quincy Theatre – Vaudeville and Photo Plays”. This large painted sign was there to the very end, easily read by anyone in the parking lots (now Parkingway, to the rear. The name was changed in 1926 to Quincy Theatre. Milton Berle and Billy DeWolf performed there. Well, actually, Billy Dewolfe worked there as an usher. There was no organ but instead there was a piano and a violinist in the pit. Eugene O'Neil’s play “Strange Interlude”, fresh from a long B'Way run, was booked into the Hollis Street Th. (near the Wang) for a Sept 1929 opening, and was “Banned in Boston”, so it went into the Quincy, and was a big hit, played 4 weeks instead of 2. The New Haven RR ran a special theatre special from South Station to Quincy which carried both the theatre goers and the cast! The name was changed to Capitol Th. in 1944. I went there countless times. It had no A.C., so it closed summers. It closed in the early-summer of 1950, and then never reopened in the Fall. The last performance that I know of occured on Sunday May 20, 1951, when a touring company of “Snow White” played on stage, after appearing the previous day at the RKO Boston. The theatre was closed up— I do NOT recall that any sort of business used it. It was demolished in April 1962. The seagulls which used to love to perch on top of the Capitol’s stagehouse, had to find someplace else to sit!

If you have access to files of the Quincy Patriot-Ledger: Sept 25 1952 has a long article about the Capitol, with a current facade photo, but it gives the impression that the house had just closed when in fact it had been closed for some time. The April 5, 1962 issue has a demolition photo taken from the balcony toward the stage just after demo began. The April 30 1962 issue has a very long article about the Capitol and other Quincy theatres.

Many thanks for your posts here, and on the Woolaston Theater page. Yes, last Dec. 30 and Jan. 1-3 on the Wollaston page I raised questions about Quincy’s theaters based on a heated memory from fifty-five years ago. Now it would be great to start a page for each of Quincy’s Lincoln (originally Casino), Strand, and Art theaters you’ve uncovered for us. I’ll go out of my way, meanwhile, to get my hands on the Patriot-Ledger of 30 April 1960.

I just created a page for the Lincoln Theatre a few minutes ago! The Art Theatre is listed under its original name , Alhambra. The Strand is also listed under “Strand”. There is also a page already for the Adams Theatre, plus a page for the Quincy Theatre, under that name, rather than the later name of Capitol Th. I believe mb848 created most, or all of these pages. In addition to the Patriot-Ledger article of April 30, 1962, visit the Quincy Theatre page for the dates of 2 other P-L articles, both about the Capitol Th. I think that there are files of Quincy P-L newspaper at the Thomas Crane library in Quincy. Happy reading to all !

I just stumbled across an old Quincy postcard on Ebay that shows part of the Capitol/Quincy theater. The photo postcard looks like it dates from circa 1960 or so, and the theater looks to be boarded up with a “for sale” sign on it. Ron must be correct that this theater was vacant before it was demolished, and not used for retail prior to Sears being built on this site.

Yes, I am correct ! I would bet on it! The Capitol was not used for anything after it closed, and remained unoccupied for many years prior to being demolished in the spring of 1962.

As the Kincaide Theatre, the Capitol was on a long list of MA theaters and halls receiving state licenses for the year ending Oct. 31, 1914. It’s condition was Good. Other theaters in Quincy on this list were the Auditorium Theatre and the Quincy Music Hall, plus some social/fraternal halls.

I talked recently with a man born in Weymouth in early-1937. He had two older sisters and occasionally they would take the bus to Quincy center and attend movies at Quincy theaters. He was in grade school when he went with them (WW 2- era). The Capitol was still called “Quincy Theatre” when he first went into it. He has very vague memories that there was some sort of stage activity there prior to the start of the feature film. (I know that there were still some remnants of Vaudeville in the USA from 1930 into the 1950s.)

The Quincy Patriot Ledger on June 5 once again presented its “Whatever Happened to —” feature, this time about the Capitol Theatre. There is a photo of the big sign on the rear stage wall. This photo looks much better in the on-line edition than it does in the print edition. The sign reads “Quincy Theatre / First Class Vaudeville / Feature Pictures / Matinee 10 cents, 20 cents / Evening 25 cents, 35 cents”. This sign was easily visible right up until demolition in 1962. Visible in the photo are two single doors in the rear stage wall – both have no steps under them so there is a fall to the ground of 5 or 6 feet. The article correctly states that the Capitol had no a.c. so it closed summers. They say it closed for the season in 1952 and never reopened, but I believe it closed at the begining of the 1950 summer.