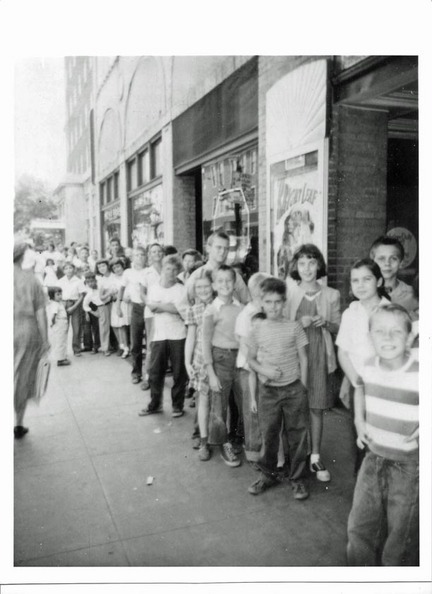 Located on the southwest corner of N. Pearl Street and Commerce Street E. The Stanley Theatre opened on August 3, 1928. It closed on May 12, 1951.

The building has been mostly demolished, only fragments remain.

The Stanley Theatre designed by Hoffman-Henon achitectural firm opened on August 3, 1928. The opening attraction was the film “State Street Sadie” with Myrna Loy and 4 acts of vaudeville. It was a joint venture of the Stanley Company of America and Fox Theatres of New Jersey, not to be confused with William Fox Theatres. It ended its affiliation with Warner Bros. who acquired the Stanley Company and operated as part of the Atlantic Theatres, Inc., Ben Amsterdam, President-Treasurer in 1949. Melvin Fox was a principal of the firm. It showed its final film on May 12, 1951. The building was converted for use as a super market and then as offices and plant for the Bridgeport Evening News. The Stanley Company also was responsible for the building and operation of theatres named Stanley in Camden, Atlantic City, Newark and Jersey City

Still listed in the 1944 FDY. Does not appear in the 1951 FDY but later appears in the 1956 FDY without a street adress, most likely denoting that it was closed at the time as Mr. Goodkin indicates above.

I saw many movies at this theater. It had a beautiful interior with wide dark mahogany twist-type pillars from floor to ceiling. The Bridgeton News (no longer Evening News) is in the building now. Previously, and after the theater closed, the Acme from North Pearl Street moved into the building space.

I was there in 1951 with my younger sister. We saw part of the movie, Annie Got your Gun, until she threw a temper tantrum forcing us to leave. I was 8 years old. She was 3. Judy Logue

Wish I could find a street address! I’ve looked through google areiel views over the entire downtown of Bridgeton (Especially Laurel St. where some other theatres were located) and can find no buildings that look like former theatre buildings, certainly not one this size. It’s probably demolished.

the theater was located on the south west corner of Pearl and Commerce, across Pearl from the high rise. the conversion from a theater to an Acme food store was done in the early 1950’s. Drawings for this work are available. The back (south) 55' of the theater were demolished and a parking lot was created. The front 80' were also demolished though some of the basement remains. The slope floor was leveled. Remanants of the original building that exist today are approximately 100 ‘ of the east and west walls, the clear span roof structure across this piece, the basements, some wall finishes apparent in the basement and remanants of the projection booth floor structure.

The structure still exists as the Bridgeton Evening News Building but is virtually unrecognizable as a movie theater, as Mr. Pedersen indicates above.