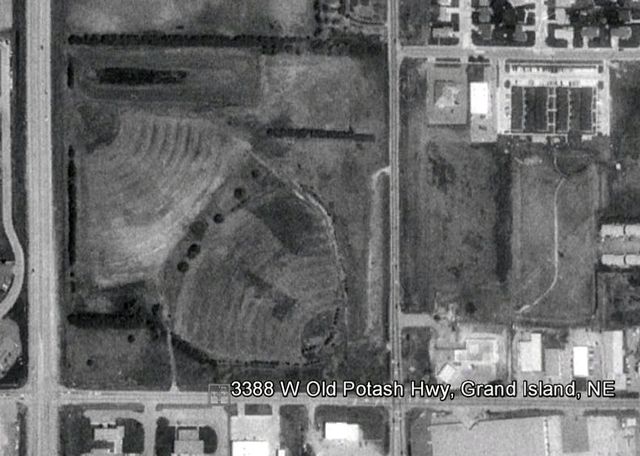 The 1963 motion picture almanac lists a Drive-In, no other name, in Grand Island. This was operated by Commonwealth Theaters. Given the Grand Island Twin’s opening date, the two drive-ins may not be related.

An item about the Grand Island Twin appeared in the April 17, 1972, issue of Boxoffice. It was apparently a second screen added to Commonwealth’s existing drive-in. The Boxoffice item said that the project would “…add 450 speakers to the present service.” It also said that a new concession area and restrooms would serve both theaters. The project was designed by Milton Costlow & Associates.

Address above is incorrect. That address is for the Grand Theatre. Approx. address for this drive-in was 3388 West Old Potash Highway. Wilmar Ave. runs through where the theatres stood.

An article in the July 16, 1949 issue of BoxOffice places the opening of the drive-in in that year.

GRAND ISLAND, NEB. – Tri-States Theatre Corp., operators of the Grand and Capitol here, have opened the 650-car Drive-In one-half mile west of the viaduct on the west edge of town. The theatre is owned by a corporation including A. H. Blank head of Tri-States, William Youngclaus and Madeline Schiller Kaufmann. …

The new theatre is located on a nine-acre tract and is equipped with RCA sound, a 35x35-foot screen and a concession stand. The manager’s office, yardman’s workroom and employes' dressing rooms are in the base of the screen tower.

Wally Kemp, Tri-States city manager, manages the drive-in. Floyd Kerwood is the projectionist and Arlyn Masten is the head cashier. Traffic is being managed by Arthur Rosenkotter and Mr. and Mrs. Robert Burtle are in charge of the concession stand.

In a four-page article about Commonwealth Theatres' drive-ins in the Feb. 6, 1954 issue of Boxoffice, they included four photos of the extensive Children’s Zoo at the Grand Island drive-in.