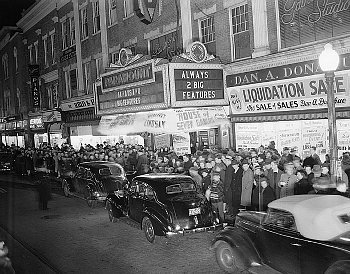 This Paramount Theater opened on April 19, 1930, originally as a Publix Theater. It was one of the first theaters to feature air conditioning.

The front entryway under the rectangular red and white marquee (Publix’s marquee was black and white) was finished in black marble. The ornate ticket booth was within the covered entryway. The front doors opened into a very long, dark red-carpeted hallway with a dark red velvet rope on stanchions down the center to delineate the traffic flow for patrons arriving and departing. The walls there were lined with occasional glass display cases holding movie posters. At the end of this hallway, a uniformed usher stood collecting tickets.

The hallway led into the theater lobby which was finished in a light green and ivory color scheme. An alternate lobby egress faced St. Peter Street. The manager’s office was at one side of the lobby. There was a large refreshments counter in the lobby as well. The restrooms off the lobby were all finished in tile and marble. Two grand staircases ascended to the balcony. There were five sets of double doors leading into the theater on each level, one for each of the five aisles.

Inside awaited a cavernous theater with 2,187 seats. The decor of the theater was Rococo style, with an intricate and graceful proscenium arch framing the wide stage. The cinemascope screen it held was 85 feet long. The molded ceiling was likewise ornate, as was the ceiling under the balcony in the rear. Speaking of which, the theater had a large balcony with brass railing, which, when the theater first opened, was intended as the smoking section. Later it was opened only for overflow crowds. When a movie was starting, two sets of curtains parted in front of the screen, one after the other, rather than the usual one at most other theaters.

The side walls featured faux boxes in the Rococo style. They were of dimensions that would convince anyone that they were real. These were actually light boxes to illuminate huge murals in the style of the French artist Watteau towering in arches topped by lunnets above the boxes. The two front boxes had velvet draperies instead, creating the illusion that they were seating areas. But they were organ chambers housing the pipes for the great Wurlitzer theater organ on stage. All the wood and plaster–for example, the balcony fascia, boxes, exit doors, proscenium arch, ceiling and other trim were gold.

Regarding lighting, to either side of the two front boxes there were very tall florescent lamps behind ornate frosted/etched glass covers. Along the side walls were sconce lights, and small aisle lights built into the aisle seats at intervals helped patrons see the aisles in the dimness.

This was certainly one of the most beautiful of the Publix (later Paramount) theaters ever built. It was much larger than the lovely art deco Paramount in Boston, and perhaps as or more beautiful. But it died a slow death with the advent of television and the pressure of exhibitors having to high rental fees for films, based on the huge number of seats in large theaters. First-run films became too costly, and reruns diminished the size of audiences further. Thankfully, this grand old dame was never cut up and converted into 10 separate theaters. Its dignity was preserved to the very end. Sadly, it was demolished in around 1971 to make way for a parking garage.

The Paramount Theater could probably have been restored and used as performing arts center. There was a parking lot in back of the theater that would have allowed a significant enlargement of the stage. But urban renewal in that era ruled, and they put the ball to the theater along with other important buildings in the city. Those of us who patronized the Paramount Theater in Salem will never forget the many good times we had there.

Those are low-resoluton thumbnails of photos in the Essex Institute-Phillips Library collection. Those and one or two others used to be viewable online but I can’t find them now. There was one shot of the long corridor leading from the street to the lobby in which half-sheet posters and lobby cards of coming films were displayed. I spent a lot of my early life in the Paramount (and other local theaters) as my previous posts attest.

That long corridor was unique and amazing. In addition to the pictures of coming attractions wall-mounted in the fancy glass display cabinets, I recall a couple of the display cabinets were rented long-term such as Pickering Oil: “Let the silver fleet deliver your heat”. They had some model delivery trucks there too. The Paramount Theater was great.

Dave, you’re really shaking up the memory cells. I certainly recall that Pickering Oil slogan. Do you remember the display board in the lobby, to the right of the central aisle entrance door with those bumper-sticker-shaped signs of upcoming movies illuminated by two blacklight tubes? That was the first time I’d ever seen things glowing with UV light. It was fascinating.

Hi Bill, Wow! I think I would have seen that but for circumstances. When I was in grade school, Saturday afternoons hosted a Kids Day. The ticket was 25 cents. The seating was all in Aisle 5. There were always one or two ushers on duty. Around 1959 the family left Salem for Danvers. As a teenager I did bring her to the Paramount a few times around 1963. Then I was away in UMass in Amherst for four years. When I returned to Danvers, the Paramount was gone! Probably that’s why I missed that UV light. Sounds like it was quite a device.

Hi Bill, on the two larger side walls nearest the stage and front exit doors, there were the two dark red curtained faux opera boxes covering the organ pipes. Then there were the other 8 painted murals on the walls behind the boxes. The last two arches were actually in the balcony—the arches but no boxes there, of course. Now my question: It seemed in my early years that every wall mural was distinct and different. But in the photo, all of the mural paintings look exactly the same. Did I perceive that correctly? David

Hi Dave: Since I virtually lived in the Paramount as a kid, I couldn’t begin to count the matinees I attended – all the Jerry Lewis pics like “Geisha Boy” (first time I got into the balcony) and “Visit To A Small Planet” and “Nutty Professor”(when Lewis appeared in person). My recall is the ticket price being 35 cents. After all, it WAS the Paramount and not merely the Plaza or E.M.Loew’s Salem whose tickets went for a quarter. I can’t fail to mention all the Disney classics as well. I remember seeing “Darby O' Gill” like it was yesterday – that was 1959, a golden year – and yes, we kids were always exiled to “Aisle 5” where we were kept from bothering the adults who had access to the rest of the house. On your question about the murals, I’ve just posted a better version of that wall photo. If you look closely you’ll see that, although similar, the murals are indeed distinct as I remember them being. Recall the “smoking lounge” that served as an ante room to the men’s rest room, with its glass table, plush couch and floor-standing ash trays? Right to the end, when you went to the Paramount, you were back in the ‘30s. Very little had changed and that was the magic of it.

I saw several of those first-run movies you mentioned at the Paramount. (The Plaza did most of the re-runs, and it seemed that Loew’s Salem Theater ran most of the horror movies.) I remember one evening at the Paramount where the movie was the complete opera “Aida”. Every last seat was sold out! It was fantastic! Yes, those murals on the side walls seemed to be the original ones for sure, given the extra photo you added. There was also quite a sizable group of ushers in uniform in the 1930s. My father, Ernest April, enjoyed working there as an usher when he was a senior at Salem High, and later when he was on breaks from Dartmouth College. I believe that early there were 17 ushers employed there. Being that I was from the next generation, there were typically only two or three in uniform at a time. The advent of TV in the 1950s marked the beginning of smaller attendance in theaters everywhere.

And yes I certainly recall the gentlemen’s smoking room. I only got up to the balcony a couple of times. As I recall the upper floor corridor, it had some nice furniture there too.

Thanks to Bill L who was able to produce a larger copy. It brings out more of the details. The Paramount Theatre in Salem was one of the finest ever.

First theater I ever visited when my mother took me to see Disney’s Toby Tyler which would make it 1960 or 61. Visited it one more time in 1968 but by then it was fading fast. Movie palaces seemed to lose all interior color as they got older. I do remember the fake opera boxes and also seeing outlines on the walls where pipes for the Wurlizter had once been.

Hey there! It’s been awhile since I have visited. Any chance there is a good quality photo of the Paramount? I would love to buy it for my boyfriend who is an avid theatre fan. Thanks!