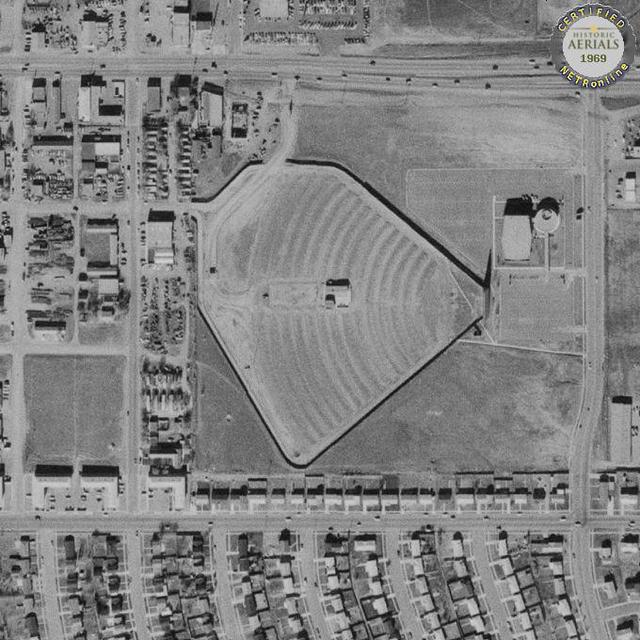 The Aircadia Drive-In opened on April 8, 1955 with John Wayne in “The High and the Mighty” & Walt Disney’s “Stormy”. This single screen drive-in had a capacity for 775 cars. The Aircadia Drive-In closed on September 3, 1995 with Scott Bakula in “Lord of Illusions” & Denzel Washington in “Virtuosity”. It has been replaced by retail stores.

I visited the Aircadia in its last season (though I didn’t know it at the time). I saw The Lion King there, which proves that it didn’t shut down until the end of the 1994 season. I remember a large drive-in sloping down to the screen and run by some large theater chain. The 1988 IMPA says Westland, but I don’t think that was it.

I hated to hear that it was gone, but the way Colorado Springs was expanding, there’s no way it could have survived much longer. Now it’s my poster child for old drive-ins that became Walmarts.

I saw the Lion King there at the Aircadia as well in 1994! This was the last Drive-In movie I ever saw.

More details on the Aircadia’s opening, as carried by the April 16, 1955 issue of BoxOffice:

The theatre is situated on a 40-acre tract, part of which has been made into a supervised Fairyland for children. Parents can watch the playground from the patio which is one one side of the self-service snack restaurant. The manager’s office and projection booth are on top of the restaurant. The screen accommodates an 86x48-foot picture.

Grounds of the theatre are adorned with large planter boxes of flowers outside the restaurant, projection building and boxoffice. The two exits at the rear of the parking space lead to several routes of departure from the grounds.

Architects were Lusk and Wallace, and local contractors did most of the work.

Once again, I was wrong. Based on an Associated Press story published on Aug. 5, 1995 in The Daily Sentinel of Grand Junction CO, 1995 was the final season for the Aircadia, and everyone was well aware of it. “At the end of this season’s run in late September or early October, the 40-year-old Aircadia – the last of the Pikes Peak area’s seven drive-ins, will close to make way for a Wal-Mart.”

And the Aircadia’s final night was Sunday, Sept. 3, 1995, as captured in a front-page story the next morning in the Colorado Springs Gazette Telegraph. The final program was “Lord of Illusions” and “Virtuosity.”

The Aircadia, “The Theatre of Tomorrow – Today!”, held its Gala Opening on Friday, April 8, 1955. The opening program was “The High and the Mighty” starring John Wayne, plus Walt Disney’s “Stormy”. Admission was 65 cents for adults, but “kiddies free”.