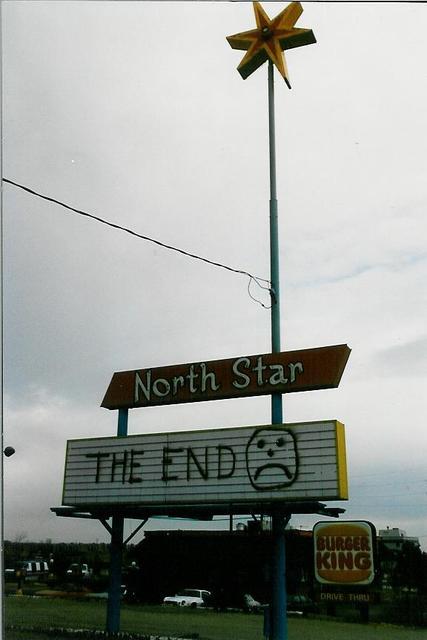 The North Star Drive-In in Thornton, Colorado (northern suburb of Denver), was one of the largest single screen drive-ins in the country. It opened by 1961 and held 1,940 cars, which could be increased to 2,000 with the addition of “fence mounted” speakers (which we did for “Star Wars” and others).

The single screen sat off the fenced property, on a hill, and the distance from the projector to the screen was 1/10th of a mile. We remained with JET-ARC projectors for many years, and Xenon used to test their various new projector models in our third position, to see if they could drive it to throw a bright enough picture the 1/10 of a mile. (Harder in an outdoor environment because of surrounding businesses, and their lights.)

When I managed the drive-in, in 1976-77 (I worked from 1975 to 1981, assistant managing, and managing various drive-ins) we used to be one of the city’s second-run movie-houses, because of our size. When exclusive movies like “Jaws”, “Close Encounters”, and “Star Wars” got out of the first-run movie houses (in those days, only one theater had the move in the city), we would be one of the four theaters in the city they would go.

The North Star Drive-In was originally part of the Compass Drive-In’s, a chain of Wolfberg Theaters. These included the North, South, East, and West (hence the “Compass” name), the Wadsworth, Havana, Arapaho, Valley and Monaco. Also, a few indoor theaters, including the NorthGlenn Twin and downtown Paramount. These were bought out by Commonwealth Theaters in 1979/1980.

The North Star Drive-In was open year around, including Christmas, with heaters. It was finally shut down and the valuable land beneath it sold in 1993.

For some reason this entry is mistakenly under Texas (possibly because I now live in Texas). However, this drive-in was in Thornton Colorado, a suburb of Denver. Could the webmaster please correct this?

This theater switched to FM sound during the late 1980s or early 1990s. The theatre sat in a depression somewhat lower than the surrounding businesses – you could park in the neighboring Burger King’s back parking lot, tune your radio to the proper station, and get a free movie! The last manager told me that many times they went up to the BK parking lot to ask for admission money.

I have many good childhood memories of the North Star Drive-Inn.
I remember as a treat my mom took us to see Batman Returns and other late 80’s early 90’s movies. Sometimes we thought we wouldn’t get in because of the long long line of cars on 84th Ave waiting to get in. Once or twice we parked in the Burger King parking lot to watch a movie ;D (Hey we were poor).
I’m now 24yrs old and live nearby. Every time i pass by Soundtrack/ Ultimate Electronics I think about North Star and wish people would keep the spirit of Drive-Inn Theaters alive. At least the 88th Drive-Inn is still around… it’s just not the same as the North Star!

Thanks Jerry for a good intro.

Follow this link to a site about 70mm projectors. Scroll to the bottom to view a photo of projectionist John Templeton posing with two behemoth DP70 projectors in the North Star Drive-In booth: http://www.in70mm.com/dp70/country/usa/colorado/index.htm

I’m standing with John Templeton in the booth of Chem-140 on the CU Boulder campus right now (Mr. Templeton’s current venue) reading the comments and he says that sure looks like the North Star he ran (off and on from ‘73-'84-when the Norelcos were replaced with a pair of Simplex 35s from some theatre in Greeley and installed by him and Jimmy Seay) and while that is North Star Booth that is NOT John in the picture but John thinks it’s Art Lane in the picture in the link. Those were NOT the DP70s but the AA2 Norelcos with the Strong Jetarc Lamphouses. There was a third machine on the right (not pictured was a Simplex XL with a high speed intermittent and a Strong Constellation 170 lamp that was used to start the show early with cartoons and trailers).The Norelcos were split up after their removal from the North Star-one went to The Arvada Plaza 6 (west of 80th and Wadsworth) and he believes the other went to a 6-plex southeast of Denver (the name escapes him presently). He says that the Jetarcs had many issues and frequently went down. Much of this comment was per his dictation. Mr. Templeton is, in himself, a “Cinema Treasure” as he has been a union operator since 1974, working most theatres that existed in the Denver and Boulder Metro Area in his career. I’m proud to call him my second dad and have encouraged him to get on this site and contribute his many memories.

The site is now a appliance and furniture rental store(Rent-A-Centre).

I’ve put together a booking history for the North Star Drive-in, from 1961 up to 1978 so far, in case anyone might like to know when a particular movie played there. I’ll be happy to share my research with you. Take care – Ken Mitchell ()