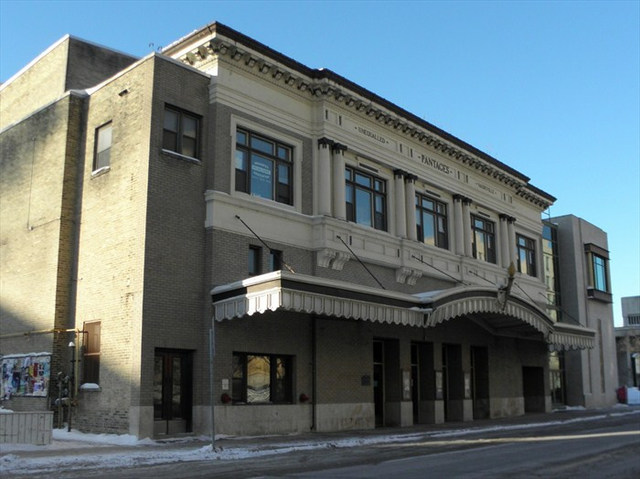 Designed by Alexander Pantages' favored architect, B. Marcus Priteca under the supervision of local architect George W. Northwood, the Pantages Theatre opened February 9, 1914. Built entirely of reinforced concrete with exterior finished in sand colored brick and cream terra cotta, while the interior was lavishly done in the Beaux Arts style. The mezzanine was originally designed to have a tea room, but this eventually gave way to a waiting area for patrons awaiting entrance to the next show.

Alexander Pantages had originally intended to build the theatre on the site of the old Manitoba Hotel which had burned down several years earlier. He had negotiated a price with the owners of the property but when he returned to the city to finalize the deal they had raised the price. He found this unacceptable and bought the property next to the hotel site. Interestingly, in recent years the same property that Pantages originally intended to use for the theatre once again became vacant and the new entrance, lobby, studios and rehearsal space now occupy that site.

In it’s first decade of operation the Pantages Theatre offered a mix of vaudeville, theatrical, musical and movies. For a number of years the theatre held the distinction of being a proving ground for acts to be sent around the Pantages circuit. However, in 1923 Pantages was lured away from his own theatre by Famous Players to combine vaudeville acts with movies at the newly built Capitol theatre and the theatre was closed.

Renamed the Playhouse (although the Pantages name remained on the theatre building pediment) the theatre reopened later the same year continuing to present a mix of theatrical acts, vaudeville and musicals. Apparently movies were dropped from the schedule. By 1930 the theatre came under the ownership of the city of Winnipeg where it has remained ever since. For a number of years it was primarily a rental facility. It has been home to the annual Winnipeg Music Festival as well as performances of the Royal Winnipeg Ballet.

By the 1980’s the theatre was showing it’s age and an aggressive plan of refurbishment was carried out to restore it to its original grandeur. The stage was reinforced, new seats were installed, reducing the capacity to 1,475 and stage, sound and lighting facilities were updated to the latest standards. The theatre was renamed Pantages Playhouse.

At that time it was decided that the original entrance and lobby were inadequate to handle the crowds and the property next to the theatre was acquired allowing the construction of additional ticket and lobby space as well as rehearsal rooms and studios. The new addition allows the original building to remain intact, complete with it’s French curve cast iron and glass marquee.

Had Alexander Pantages been able to build the theatre on the original site no doubt it would have fronted on Main Street.(the present theatre site is one building lot down from the corner.) When the new lobby and studios were built a few years ago, it was to the side of the original building. The remaining land is now a small park with walkways leading from Main Street to the theatre. There is a pylon at the corner of Market and Main with illuminated Pantages name and attractions panels as part of it, so almost 100 years after the fact, Pantages has visibility on Main Street.

The Performing Arts Consortium now manages the theatre for the City of Winnipeg. Their website is www.pantagesplayhouse.com They also have a “History” page with pictures for a few of the other Pantages theatres in North America.

Three photos of the Pantages can be seen on this page at the University of Manitoba’s Winnipeg Buildings Index. Photos depicting the 1991 addition to the Pantages, as designed by Stechesen Katz Architects, are available on this page of the same site.