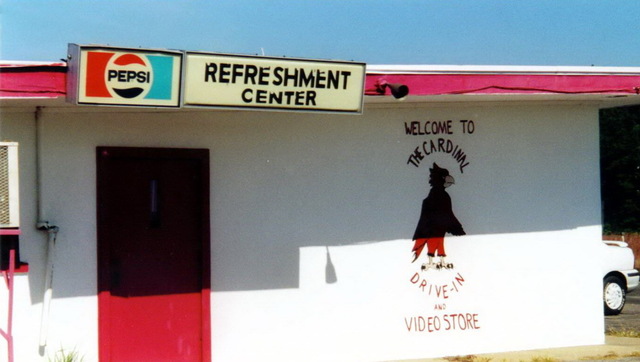 The Cardinal Drive-In opened in 1950 and closed around 1998. This single screen drive-in had a capacity for 400 cars.

According to one source I’ve seen, The Cardinal Drive In was also known as the 45 Drive In and the Hi-Way Drive In at various times, and was operated by the Malco Theater chain from 1961 to 1975. I went there quite a few times in the 80’s and 90’s, and it was the Cardinal Drive In then. It also doubled as a video store during the day, and I believe the video store is still in operation in the former concession stand. I also believe the screen and field are still intact so that it could be reopened.

MAYFIELD, KY.-The new Cardinal Drive-In has been opened on a 25-acre site near Mayfield by Ned Greene, owner-manager.

I noticed the other day ago the screen is gone.

The approximate address for this drive in was 2829 US-45, Mayfield, KY 42066. The street north of this theater formerly known as County Farm Road is now Cardinal Road.

This address is next to Mayfield Memory Gardens. Please update.