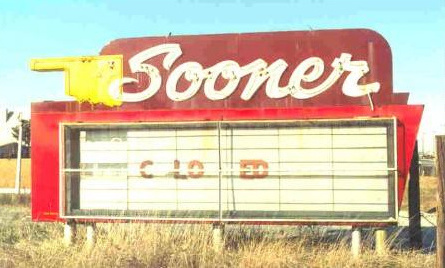 For some reason, it’s much easier to find ads for the Tri State in the Miami Daily News-Record than for the Sooner, though the Sooner was included in prizes for the first baby of 1954.

When did it close? In July 1984, the Joplin Globe wrote about alleged bicycle thieves who were “cornered on foot at the Sooner Drive-In theater on North Main Street.”

There’s a good photo from 1985, showing the back of the screen in need of some repair, at American Classic Images.

Aha! Thanks to the excellent notes at MiamiHistory.net, I have a better explanation for the confusion. The original Sooner opened “a mile south of town, on 66.” Miami History claims that site was prone to flooding, and anyway “At some point between 1961 and 1965, the Tri-State was renamed to the Sooner. According to historian Fredas Cook, it was to take advantage of the much nicer Sooner sign formerly used south of town. Fredas also points out that the original Sooner was a traffic hazard due to its screen facing the highway, that may have contributed to its being closed shortly after opening.”

Where was that short-lived original Sooner? Looking at the maps and photos at Historic Aerials, I’ve found a good candidate in an otherwise unaccounted for drive-in at Dotyville, just southwest of Miami. It’s on the northwest corner of US 59 & Old Route 66 – Google Maps calls it 10991 US-69. The drive-in was on the 1963 topo map, and the ramps were still visible in 1980, but there appears to be no trace of it now.

Just so I’m clear on this.

It’s true. This Dotyville Sooner is what I’d call Sooner #1, not #2, since it was a Sooner first.

From the August 12, 1953 issue of The EXHIBITOR: “Video Independent Theatres opened the Sooner Drive-In, Miami, Okla., and the Airline Drive-In, Ponca City, Okla.”

The Sooner Drive-In was damaged in a rain storm and appears to have been closed following the June 12, 1954 showing of Richard Widmark in “Take the High Ground!” An ad lists the theatre as closed indefinitely until the screen and the ramps can be repaired. Those repairs do not appear to have occurred and the sign was moved a decade later to the Tri-State location.

Although I love the idea of the flooded Sooner’s last show being “Take the High Ground,” it actually continued to advertise through Friday, June 18, when it added, “Notice To Our Sooner Drive-In Patrons! Due to heavy rains and damage to drives and ramps surfaces, the Sooner Drive-In will be closed after last show Saturday (19) for resurfacing of parking area, and will remain closed until all repairs are complete! Attend the Tri-State Drive-In for the Best Movies Under The Stars!”

Thanks to a visit to the Miami Public Library’s microfilm collection of the Miami Daily News-Record, I now know that the original Sooner opened on July 2, 1953.

I’m not sure which was the first movie it showed, because its ad that day promised the 1951 flick “Two Tickets to Broadway” … “starring Virginia Mayo, Gloria DeHaven, Dennis Morgan, Gene Nelson”. Except that none of those performers were in that movie; they were all in the 1951 film “Painting the Clouds with Sunshine”.