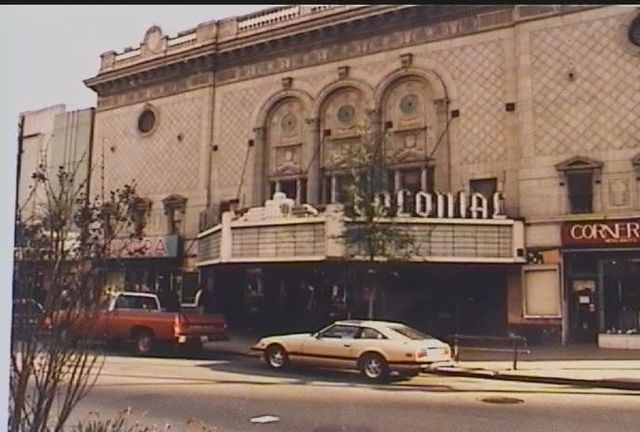 The Colonial Theater opened on October 12, 1921 with Thomas Meighan in “Cappy Ricks” and a Harold Lloyd comedy. Interior designs were by Richmond sculptor Ferrucio Legnaioli and the seating was arranged in a stepped stadium style.

Closed in 1981, it is listed as demolished in 1992 with the facade preserved as the front of an office building.

For my dollar, or at least my 75-cent box seat ticket, the Colonial was one of the most bewitchingly beautiful theatres ever built. Although I’ve not updated the site in quite a while I posted a description on my theatre website some time back:

This theatre had stadium seating before anybody preferred it

stray 1978 clipping of newspaper ads for Colonial and other Richmond area Neighborhood Theatres:

Here is a photo circa early 1960s:
http://tinyurl.com/yzssvdk

Towne, State and Colonial Theater’s Were a favorite spot for me back from 1981-85

See,As I Mentioned in this Site’s Entry for Ridge Cinema,While I was friends with Ray at NTI, the Film Escape From New York played for a couple of weeks and has been an all time Favorite EVER SINCE! So I first went Downtown to the Colonial to Meet Mr. Jerry Norwood who eventualy Managed the Crater Cinema in Petersburg Lastly (That I know of) The Ridge.Anyhoo,I met with Jerry and although I was only 16 at the time I knew enough about the Theater Bussiness to see it was almost the end for the Three Theaters I think One (The State remained till Last?) So,I got a set of Escape From N.Y. Lobbies and jerry asked me if I wanted to take all the Posters etc upstairs in the Office? OF COURSE I Grabbed em' with BOTH Hands! lol I sold a couple to Petey at “Plan 9 Records” and the rest I held on to. Over the Years I had no place to store and got rid of a Six Foot Gene wilder & Richard Pryor Dressed In Chicken Suits Standee from “Stir Crazy” (Wished I did!) But I after filling my buddy’s Trunk with all the three theater’s EVERY LAST 1-Sheet,Lobby Card,Standees,etc I went home and was jotting all My Memrobila in a note book when I discovered an Envelope containing a unused Bumper Sticker that said just “Return” Turns out this was a correction sticker to cover the word “Revenge” on the “Return Of The Jedi” Posters. Seems Lucas decided Last Minute “Revenge” is not a Jedi behavior so he changed the title AFTER the posters had been printed and mostly distributed to the Theaters. If you have the UN-corrected it pretty rare but IF you have the un-corrected poster AND the correction sticker,well my friend I’d guess you could buy your own Fully Functioning DEATHSTAR! lol Saddly I don’t have but a couple of these Treasures left ( the Jedi posters are long) But I have the Memories still complete after the last theater closed down I went on a mission to liberate the Poster and Lobby Card Frames still behind the Glass (Some Boraded up but intact)Wy Friend Ed and I Drove downtown and parked behind the theaters in a Cobblestone Alley. Wearing Black Slacks and a White Shirt I Disgusied myself as an Usher and Armed with a Flathead Screwdriver I procceded to (In broad daylight) Stroll right up to the Large Hinged Glass Windows that held these frames behind,So Poping them Open was nuthin'Now understand in front of these Theaters was working Bustops with People waiting for their buses. Noone paid me any mind whatsoever as I methodically Pryed the 6 Lobby card and 3 Onesheet Frames off the Red Foil Backwalls they were mounted upon. I made my way back around to my friend’s GTO and tossed the frames in the backseat. The Mission seemed like a sucess as Ed drove down Broad St. back towards Willowlawn and safety..Ed’s 67'GTO was a Beauty BUT it had a Hoodscoop that (he was aware) was 2 inches taller that is legal.So somewhere near Broad & Meadow St. Near the Old Train Station He Get’s Pulled Over By Richmond’s Finest,Ed Who looked a little like Peter Fonda in Easy Rider gives me a look that could KILL as the Officer comes up to the his Driverside Window and Asks “Do You Know Why I’m Stopping You Today Sir?” and Just as I’m About to Blurt out an entire Sobbing Confession about the Poster Frames Filling the Backseat, The Cop continues..“I See Your Inspection Sticker is Over Due.” LOL I was relived but I was now sitting in a Puddle although it wasn’t Raining! lol Funny part was as they were about to give my friend a Ticket the Police got a call apparently more important then us and suddenly gave my buddy a warning and took off Whew! so I’ve lived here in Naples Fl. since I got Married 1992 and I haven’t been back to richmond since but I’ll always treasure these Cinema Memories and Thank you for this Website

The architects names are currently mispelled in the Firm field. It should be Carneal & Johnston.

Although there is no doubt that this theater was designed and built in 1919-1921, a list of Richmond’s theaters in a souvenir booklet published in 1908 includes a Colonial Theatre located at Broad and 8th Streets. I’ve been unable to discover what became of that house, or whether or not it ever showed movies.

There was a previous Colonial that was taken down to be replaced by the one mentioned here.See page 22 of the book “Celebrate Richmond Theater” compiled by Elizabeth and Wayne Dementi and written by Katheryn Fuller-Seeley. This book shows many fine pictures of Richmond Theaters of the past, including but not limited to the afformentioned and also the Bijou that was in the next block on theater row!

The “old” Colonial definitely ran movies; I have seen ads for the Mutual-Chaplin specials playing there during 1916-17.

The Colonial was pretty much my baby, so here’s the skinny: The original Colonial was an ancient building that at one point was the 8th street terminal of the RF&P railroad. It was turned into a theatre in the 1880s, but didn’t succeed, and became a storefront. Jake Wells, who was a professional baseballman at the time, stopped into the store to buy luggage, realized that it had been a theatre, and eventually bought the place and opened it as the Bijou in 1901. In 1905 Jake and his brother Otto opened a new Bijou a block away between 8th and 9th and the older theatre was renamed “Colonial.” By 1919 the Colonial, which was showing both vaude and pictures, was not only outdated but falling apart, so the Wells Brothers commissioned the New Colonial, which opened on October 12, 1921. It was intended purely as a picture theatre; vaudeville shows were then booked exclusively into the Bijou and the Lyric.