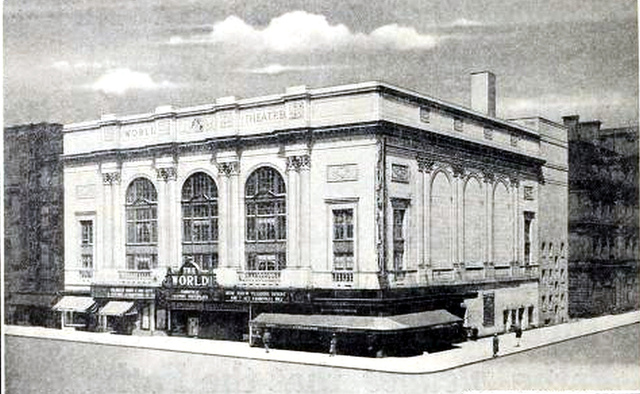 Opened April 15, 1922, the World Theater was one of Omaha’s finest examples of Beaux-Arts style, and was reputed to have the most beautiful exterior of any of the theatres designed by architect C. Howard Crane & Harry Lawrie.

The main façade consisted of a five-part, glazed terra-cotta composition with elaborately articulated parts. Central to the composition were three-story round arched windows and iron mullions, railings, and balustrade sills. The windows were framed by four groups of coupled Corinthian columns, which supported an enriched frieze and cornice complete with dentils and modillions. A parapet wall with sculptured inserts and the inscribed words, World Theatre topped the structure. It was equipped with a $45,000 Hope-Jones Wurlitzer pipe organ.

The theatres' name was changed to the Omaha Theater on February 20, 1935, and despite considerable community effort to save it, it was closed February 26, 1978. The theatre was demolished in 1980 to make way for a multi-story parking garage.

According to the WPA Guide to Omaha, there was a theater on the east side of this block, where the UP Center is now located (formerly a parking lot, directly north of the library). Am I mistaken? And if it did exist, did it ever show movies, or just live shows?

The UP Center is located on 15th & Douglas. The Rialto Theater was located on the corner and it showed movies. Later the building contained the men’s store Tully’s. The only movie I saw at the Omaha was “Jaws”. Now that entire block is a parking garage. Downtown Omaha is now just a mass of parking lots & parking garages. I’ve lived here all my life and am very disappointed with the lack of historical preservation and seeing memorable buildings being demolished.

Mormonpreacher, you think like I do. I would love to see Omaha’s old “theater row” recreated. The problem is, there was a reason those buildings were knocked down. They weren’t viable from a business standpoint. How would someone make a new Omaha Theater work?

I last saw this theater in 1955, when I was agout 16 years. The interior was in neoclassival, “Adam” style, in colors of Pompeian red, moss green and cream. Very restained and rather elegant. At that time the organ was still in the pit, though the grille openings originally draped with curtains had been plastered over and painted. Some said that the organ originally spoke throught a “mixing” chamber from the ceiling, though I doubt this very much. The sight-lines in this theater wer pehnomenal. From the last row on the orchestra level one felt as though one could reach out and touch the stage. There were two balconies, neither very deep. The house was usually quoted as seating 2200.

I remember going to this theater back in the 70’s during the era of blaxploitation films. Movies like Shaft, Superfly, Across 110 Street etc… were showing there at that time. Great memories.

Omaha Opera House should be added as an AKA name in 1939. I added an April 28, 1939 photo of the premiere of “Union Pacific” at the then Omaha Opera House to the Photo’s Section. Photo & copy courtesy of Richard Thies‎.

The trade press cites C. Howard Crane and Harry Lawrie as co-architects in 1921