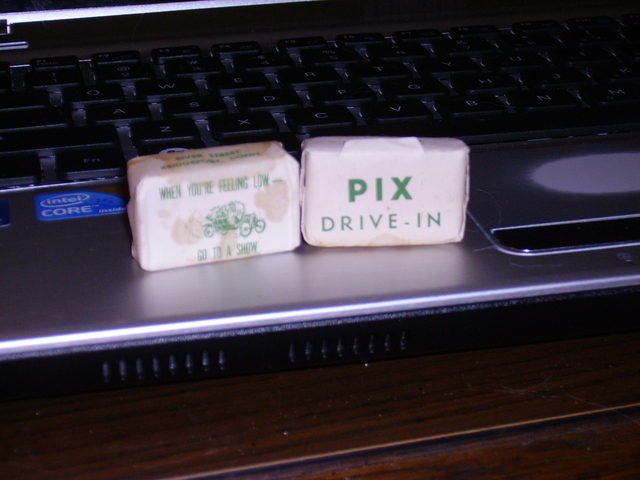 The Pix Drive-In was opened July 29, 1955 with Glenn Ford in “Interrupted Melody” & Lex Barker in “The Man from Bitter Ridge. It was located on River Street at N. Washington Avenue adjacent to the closed Candlelight Stadium, which was demolished and the Candlelight Drive-In was built on that site, opening on September 2, 1955 (in In the 1955 edition of Theatre Catalog, the Candlelite Drive-In was listed as (Under Construction) by E.M. Loew).

The two drive-in’s were merged after the end of the 1956 season, and then operated as the Candlelight-Pix Twin Drive-In from April 5, 1957 under E.M. Loew’s Theaters Inc. It was still open in the early-1970’s.

Yes, it was a twin screen theater and I spent many happy moments hearing the movie on one screen with my head turned around watching the movie on the other screen. The snack shop sold drive-in pizzaa that tasted like tomatoes on rotting cardboard and egg rolls that tasted like molten shoe leather, but, if it could be brought back, I wouldn’t change a thing!

Roger Bailey, of Patchogue, LA captured the 25-lap feature midget auto race at Candlelite Stadium yesterday afternoon. The racing program marked the close of Candlelite Stadium as a sporting arena and it will be torn down for a drive-in motion picture theater which is expected to be completed before July 1.

Part of the grandstand and all the bleachers on the left field side of the baseball diamond already have been razed. The several hundred fans who watched the midget racers yesterday sat in the right field bleachers and on the terrace.

Here is an August 1958 ad from the Bridgeport Post:
http://tinyurl.com/phga6u

My uncle’s construction company was in the same area as the drive-in. I remember the drive-in closed and my dad and I would drive past it to go to my uncle’s office. In my memory I can still see the tall gray metal wall with the letters PIX on it (it was probably the backside of the movie screen). I beleive when it was an operating theater, the PIX letters were made of red neon lights.

Here is a 1960 aerial photo of the drive-in, courtesy of HistoricAerials.com.

I remember being at one screen and watching the movies on the other screen at the same time. We saw a Bruce Lee triple bill (Enter The Dragon, Fists Of Fury and The Chinese Connection) there 2 nights in a row. There were 7 or 8 of us cramped into my ‘66 Riviera. I think “Blacula” and “Abby” on a double bill were the last films I saw there.

The Pix Drive-In opened on July 29, 1955. This was located on River St. at North Washington Ave, next to the recently-closed Candlelite Stadium. Just over a month later on September 2, the Candlelite Drive-In opened on the old stadium site at River and Evergreen Sts. After the 1956 season, the two drive-ins merged under the E.M. Loew’s banner and opened as Candlelite-Pix Twin on April 5, 1957. From Historic Aerials, you can see the stadium in the 1949 satellite photo; followed by the drive-in sites in the next available photo from 1960.

This twin-screener closed at the end of the 1982 season. It was sold for $600,000 and became part of an industrial park area by the city.

Billboard, Oct. 16, 1954: “Seymour B. Levine, Stratford, Conn., who operates the Bowl Drive-In, West Haven, has petitioned the State commissioner of police for permission to erect a drive-in theater to accommodate 450 cars on River Street, Bridgeport, on a site adjacent to Candlelight Stadium. If permission is granted, a spring opening is planned.”

The Pix Drive-in opened with “Interrupted melody” and “The man from Bitter Ridge”.