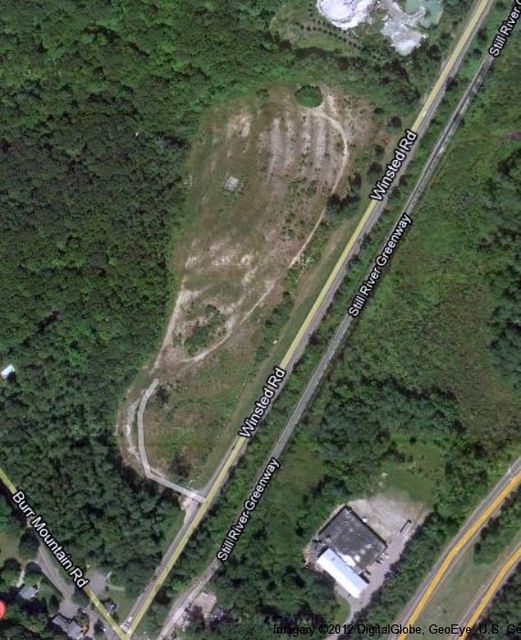 The Torrington Drive-In was opened on AUGUST 15, 1950. It was operated by Sam Rosen, Lockwood & Gordon Enterprises. It was possibly closed in the 1980’s.

The Torrington Drive-In closed in the 1980’s (I think), but its screen still stands. You can also see the foundation where the snack bar used to be. The marquee stands, but its covered up by a sign advertising a “Connecticut Bike Week” from years past. The screen is nearly blocked by the tall pine trees that have grown up in front of it. The trees at the back of the lot, however, have been removed. The drive-in property was under consideration for the site of the new Litchfield County Courthouse, but they have decided to build that elsewhere.

Can anybody tell me where this place is? Would like to photograph it and can’t find an exact location.

A quarry excavation company has bought the site of the former Torrington Drive-In theater for $2.5 million. Haynes Aggregates-Torrington on Dec. 19 paid N & L Associates of Torrington for 18.19 acres of vacant land along Winsted Road that last served as home to the theater around the early 1980s. Until a couple years ago, the site was where upwards of 20,000 motorcyclists landed for the semi-annual Connecticut Bike Week.

Haynes, with a corporate office in Seymour, owns and operates a quarry excavation site that abuts the theater property to the north, at 3217 Winsted Road. It was unclear Thursday the company’s plans for the land.The company, which blasts earth and crushes rock, also owns land at 3237 Winsted Road and 260 Burr Mountain Road. In August, Haynes leaders won a permit that allows them to keep the business running through 2008.

N&L Associates is a part of C.H. Nickerson & Co., a general contracting firm based on Hayden Hill Road. City records don’t specify how long the company has owned the land, last appraised at $196,400.

The theater opened along Winsted Road on Aug. 15, 1950, and was operated by the Lockwood and Gordon Enterprises. It featured a giant white screen 70 feet off the ground, room for hundreds of vehicles, a concession stand with bathrooms, and a large playground. Today, that screen stands behind a row of tall trees. The field before it is full of weeds, metalwork, and a pile of tires. The marquee and foundations for the concession stand and projection booth remain.

In 1989 and into 1990, the site was considered for Litchfield County Courthouse. The court will ultimately end up in the Timken Co. property on Field and Clark streets in Torrington.

Sue McKitis-Perillo of Barkhamsted, head of museum education at the Torrington Historical Society, has fond memories of her family’s ventures to see a movie at the theater, which showed “Guess Who’s Coming to Dinner?” in 1967 and cartoons including Bugs Bunny. “My mom would cook up hamburgers, wrap them in newspaper, we’d get in our jammies and go to the drive-in,” she said.