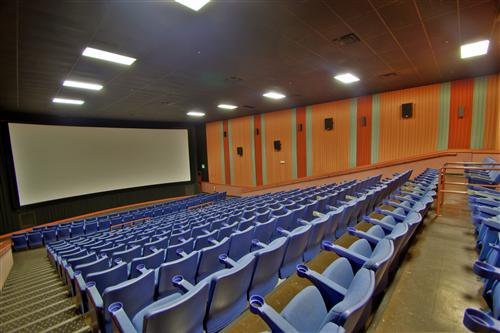 Opened September 30, 1994, the Rosemount Theater is an eight screen theater operated by Marcus Theatres. This theater shows first run movies and has all digital sound.

Its largest auditorium has a capacity of almost 300. Its smallest has just over 100 seats. Dolby Digital & DTS when I worked there, though DTS was only present in the large auditorium. Rosemount’s stadium retrofit features a more gradual slope than neighboring theatres, as it was originally a traditional multiplex. Before its 2003 remodel, a lighted chandelier hung from the center of the lobby & a fountain sat opposite the concession stand. Bathrooms were larger than any multiplex nearby. Auditoria have curtain-padded walls with blue, red & green colors in different auditoria.

Rosemount features Christie Projectors & platters. Some screens are not correctly proportioned for the cinemascope aspect & suffer from image bleed onto the walls. GTI opened this location in 1993 & like Shakopee & Apple Valley, intended this to be a lobby-run theatre, with endless loop platters & automation controls behind the concession stand. In 2002, the ELF’s were converted to conventional platters & lobby operation discontinued, thankfully.

This opened on September 30th, 1994. No grand opening ad appeared in the Star Tribune.