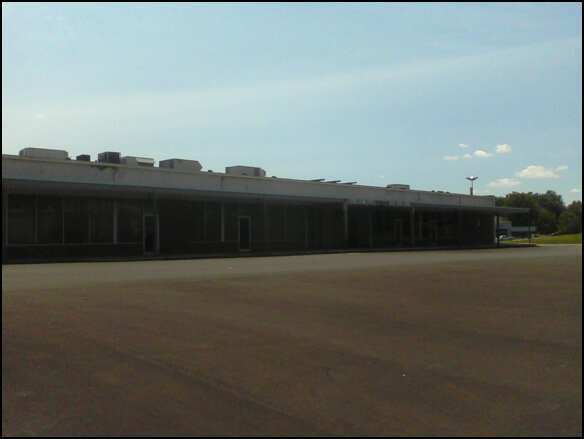 Located across from the Antioch Center on NE Vivion Road. The 4-screen Chouteau Cinema was opened on May 22, 1974. It was closed on December 27, 2000.

This theater had four screens. Theaters 1 & 4 were shotgun style auditoriums. Theaters 2 & 3 were the larger two auditoriums, seating 290 each. Give or take a few seats. I loved this theater. :(

I worked there back in high school. Concessions and did the Thursday night marquee duty (street & rooftop) – I remember The Saint, Romeo & Juliet, Space Jam and Ransom playing there.

Growing up, I remember seeing Jurassic Park (1993). It was there in Oct. 1994 and released on home video. One of the last movies to play a year+ in theaters. I remember it played with the old DTS Experience logo.

Michael (1996) – I started to clean up the theater for the next showing and this older couple got all sour at me because I had blocked their view of the end credits crawl. They left and another older couple told me, “Don’t mind them, kid.”

Also, there use to be, I think, three stencil posters of Charlie Chaplin, Marylin Monroe and John Wayne in the lobby.

Music played out by the concession stand and I remember dancing with one of the co-workers briefly and a customer came up, “Don’t let stop you all. Just wanted some extra butter on my popcorn.”

I think there was a Giovanni’s Deli next door, too.

It closed – then got rented out by a church group – then re-opened briefly before closing, again.

Great staff that worked there. Not bad for a first job.

Screen boom puts future of older movie houses out of focus Discount status may await some longtime favorites. You don’t open 150 movie screens in six months in a town this size without creating a lot of fallout.In the Kansas City movie market, that fallout already has begun and will undoubtedly continue. Be prepared to find your local movie house closed or turned into a discount operation.Late last month the Truman Corners, Blue Ridge East, Blue Ridge West and Chouteau cinemas were shut down by their owner, the Cinema Venture Corp. All four (comprising 20 screens) were ``dollar 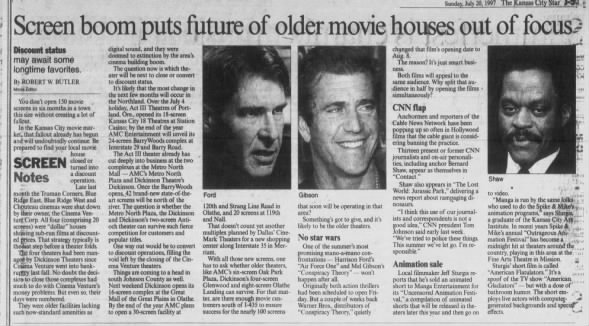 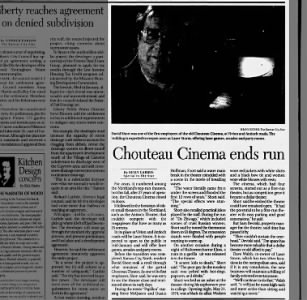