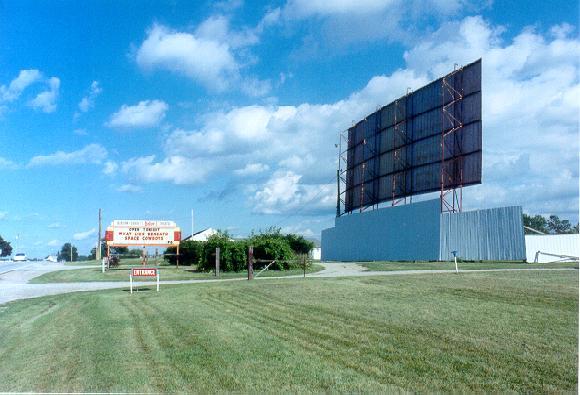 The Tri-Hi Drive-In opened on May 16, 1951 with Veronica Lake in “Isn’t it Romantic?”. It was renamed Auburn-Garrett Drive-In on April 8, 1960. I have been going to this drive-in theatre for years now. $6.00 per person for two movies and the food is great!

Thanx much for the update.

This drive-in appeared in the film “Freak”.

Remodels / Expansions: Originally built in 1951 as the Tri-Way Drive-In as a smaller, single screen. A few years later, more parking was added. A new screen replaced the old screen with the advent of Cinemascope and the name was changed to Auburn-Garrett Drive-In Theatre. In the early 70’s, an even bigger screen was erected as yet another replacement, and additional parking was added bringing the capacity to 420 cars. This is the screen currently in use, and the current capacity is still 420 cars.

We are one of the few remaining drive-in theatres that does not charge for children 11 and under.

Daylight savings time in the state of Indiana has been a difficult adjustment, but we are still producing sell-out nights and record breaking box office events.

This year marks our 55th anniversary, and we constantly thank our patrons for our success and endurance over the years.

My family and I have been going for years. My mom and dad took us and now I am taking my kids. We try to make it at least a couple times each summer but we love going on labor day and getting to watch 3 movies for the price of one at any other kind of theatre. Thanks for keeping this place going we love it.

The 1969 IMPA already showed a capacity of 430, so I’m guessing that either the parking expansion came before the new screen, or they both happened a little earlier than estimated.

The Garrett Clipper newspaper shows the original name of the drive-in as Tri-Hi, not Tri-Way. It opened for the 1960 season as Auburn-Garrett on April 8 that year.