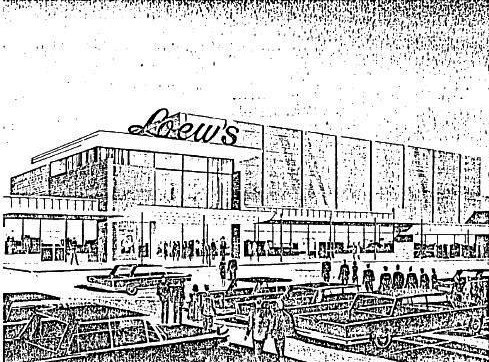 Loew’s was so proud of this new theatre that they featured it in the company’s 1965 annual report. It was scheduled to open on Christmas Day, 1965.

This theater closed in 1985 and went over to retail use. It was demolished in Spring of 2018.

I have an address listing the Fairfax Circle at 9488 Arlington Blvd, Fairfax, VA and had a seating capacity of 1,200.

Here is the 1965 sketch of the Loewâ€™s Fairfax Circle and this is a March 2008 photo of the building in its current incarnation. The interior has been completely gutted.

Loew’s Fairfax Circle opened on 12/23/65. It’s initial attaction was the first-run engagement of THAT DARN CAT with Hayley Mills. The film also opened at several other D.C. area theaters. Like almost all Disney films released in the mid-to-late 1960’s, it did not play in downtown D.C. The most notable exceptions to that were A TIGER WALKS, MARY POPPINS, and THE HAPPIEST MILLIONAIRE.

Another theatre thats a sore now.

My sister and I saw “Back to the Future” here. Didnt realize that it was the last movie to play there.

The last safety patrol movie was shown in Dec 1984/Jan 1985. It was “Dune”. I worked here for a few weeks until an opening came up at Bradlick Theatre (also in the Circle/Showcase company). Officially, Fairfax Circle had 1,169 seats.

In ‘79 or '80 (still in middle school) I was invited to play in my first ever band. The band consisted of two of this theatre’s late night projectionists and some others. After the night’s last showing, we would drag the gear out from behind the curtains and play Neil Young songs for hours and hours through the “sens-around” system. Except for my drumming; it sounded and felt AWSOME! I also was able to learn how to splice film, run the projectors and mix every kind of fountain soda together. I would love to do it all over now. Thanks Lowes and Charlie and John.

I worked there for 11 years,1972-1983. All the First run movies were shown there. A fun place to work!! Made some life long friends there.

I’m not sure but I think this theater was the one that had a very wide screen and was featured in a local news feature(Channel 9?), in 1983, on the opening of Star Wars: Return of the Jedi. I’m thinking the feature had stated this was the largest screen in Virginia that was showing the movie but was NOT in 70mm.

The Fairfax Circle Theatre building has finally been torn down in Spring 2018for a new commercial/residential use area. No theatre planned for the new construction.